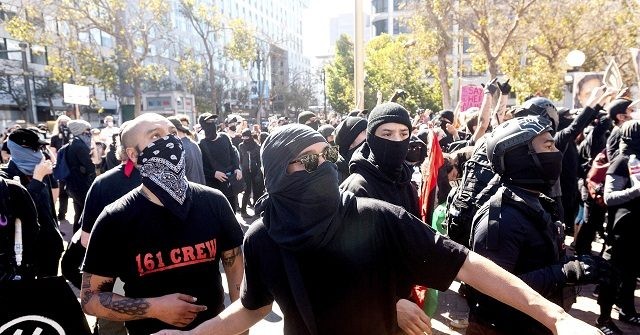 San Francisco police had to quickly extract a group of conservative activists who attempted to hold a Free Speech Rally and Protest at Twitter headquarters. The small group of protesters was quickly surrounded by a violent mob of Antifa counterprotesters.

One video shows a van driven by a San Francisco police officer being escorted by multiple police motorcycle officers and they move the “Make America Great Again” hat-wearing protesters to safety. The officers drive the conservatives back to a parking garage where their cars were parked.

An earlier video shot by @VivaLaHaley3 shows the relative sizes of the conservative protesters and the massive mob of Antifa counter-protesters.

At about the six-minute mark in the video, the police decide they need to move the group out of the area as the mob becomes more and more unruly. “Let’s go, let’s go,” an officer can be heard directing the group.

A large group of San Francisco police officers move the conservatives down the street until they again become surrounded by the counter-protesters. The video ends as the videographer decides to stop streaming in an attempt to de-escalate the situation.

The mob chasing the conservatives continues to grow in size and anger, a second video shot by Team Save America shows the events at the rally where the counter-protesters began hurling glass objects at the speakers. Police determine the area is unsafe and move them away.

At about the 34 minute mark in the video by Andrew Duncomb (Black Rebel), the police appear to be unable to control the situation and they quickly load the conservatives in police vans to whisk them away to safety.

This is the full video of the Demand Free Speech Event.#TeamSaveAmerica https://t.co/7TEdSbhiVx

The group eventually makes their way to their vehicle and depart.

Bob Price serves as associate editor and senior news contributor for the Breitbart Texas-Border team. He is an original member of the Breitbart Texas team. Price is a regular panelist on Fox 26 Houston’s What’s Your Point? Sunday-morning talk show. Follow him on Twitter @BobPriceBBTX and Facebook.