EXCLUSIVE: The Trump campaign’s national press secretary had his Twitter account suspended Thursday after he tweeted about his experience of being sent absentee ballot materials intended for someone else.

National press secretary Hogan Gidley tweeted about receiving an envelope in the mail that was addressed to someone else, by the name of “Daniel.”

“Got ‘my’…uh wait…no…”Daniel’s” ballot in the mail?!? Who is that? Apparently it’s a former tenant who hasn’t lived in the unit for 8 YEARS!!! But yeah, sure…the mainstream media is correct…unsolicited vote-by-mail is ‘totally safe.’” 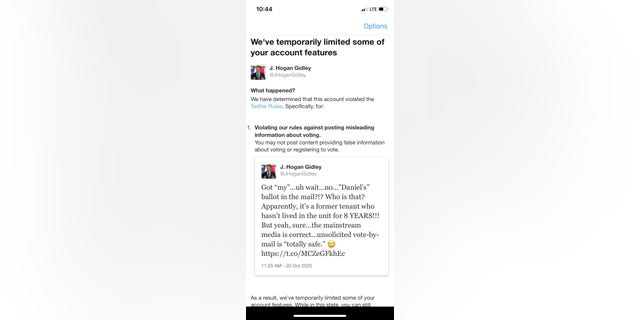 He attached a screenshot of an envelope postmarked from the D.C. Board of Elections and marked “Your Official Ballot.” Separately it was marked “Official absentee balloting material — first-class mail.”

Gidley was temporarily suspended by Twitter for violating the social media platform’s rules — specifically those about “violating our rules against posting misleading information about voting.”

“I, like many other Americans, received a ballot in the mail that was not meant for me, and that proves what the president has been saying is one hundred percent correct — that there are serious issues with the Democrats’ plan for universal, unsolicited mail in voting,” Gidley told Fox News.

“Irrationally, inexplicably suspending my Twitter account simply for tweeting about the incorrect ballot is completely insane, and it won’t cover up the fact that Democrats changing the way we vote just weeks before an election is dangerous and fraught with the potential for massive fraud,” he said.

The Trump campaign told Fox that Gidley has appealed the decision, and is not deleting the tweet in question. Fox News reached out to Twitter for comment and will update the story as needed.

Twitter has been cracking down on what it describes as false information about the alleged risks of mail-in voting. President Trump and his campaign have repeatedly flagged instances of alleged fraud, and Trump himself has tangled with the social media platform on the issue.

Twitter has slapped warning labels on a number of Trump tweets, including in August when he tweeted that mail drop boxes were a “voter security disaster.”

That tweet was judged to be against Twitter’s rules on “civic and election integrity.”

Despite Trump’s broadsides against mail-in voting, instances of voter fraud are exceedingly rare and voting by mail is a secure way to cast a ballot during the COVID-19 pandemic, according to election experts.