President Trump’s reaction to the disgusting attempted assassination of two young deputies in Los Angeles, one the mother of a small child, has been the natural outrage and anger that any thinking, feeling, decent person would have.

Joe Biden’s reaction was to tweet an insincere B.S. bunch of malarkey with no teeth obviously written by committee that fails to address the specific problem or the Democrats complicity in it. 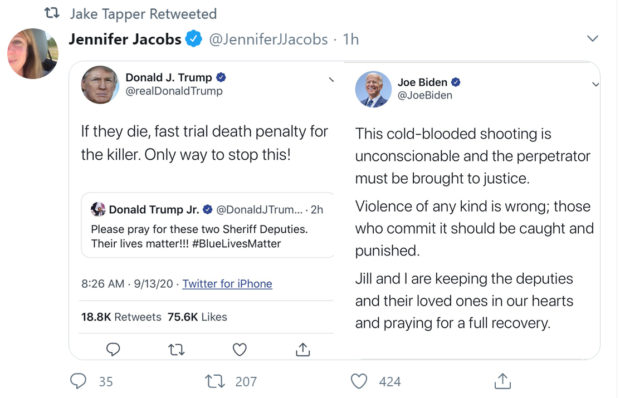 President Trump early this morning retweeted the Sheriff’s office sharing the video of the ambush shooting. “Animals that must be hit hard!” he said, like a normal person. Later he tweeted “If they die, fast trial death penalty for the killer. Only way to stop this!” Which is not only normal but absolutely correct and, importantly, IT’S WHAT MOST PEOPLE THINK.

Joe Biden tweeted this message, written obviously by committee for minimal impact and downside. A perfunctory and bland impersonation of condemnation:


“This cold-blooded shooting is unconscionable and the perpetrator must be brought to justice. Violence of any kind is wrong; those who commit it should be caught and punished. Jill and I are keeping the deputies and their loved ones in our hearts and praying for a full recovery.”

At least he mentioned the victims. 1 point.

That’s the third time he’s tweeted “unconscionable” just this week. The other two times he was talking about Trump.

He uses “justice” in a lot of tweets, also. Notably, he’s historically used it to ENCOURAGE the BLM protesters in the streets, not condemn them or ANTIFA for murder and mayhem.

In every corner of the country, people are raising their voices and demanding justice. It gives me so much hope.

Together, we’re going to transform this nation and ensure justice finally rings out for all.

The two sides are not at all the same in this election. https://t.co/5SEshheHjR

The sentence is correct, but not for the reason he thinks.

Also here’s a question. What ever happened to libs making fun of and attacking people who offer prayers after a shooting? Guess they love it now. How interesting.