President Donald Trump on Wednesday called on congressional Republicans to come to an agreement on a larger economic relief bill that includes direct payments to Americans, differing from what the GOP attempted to push through the Senate last week.

Trump alleged Democrats are “heartless” and “don’t want to give STIMULUS PAYMENTS to people who desperately need the money, and whose fault it was NOT that the plague came in from China,” adding, “Go for the much higher numbers, Republicans, it all comes back to the USA anyway (one way or another!).”

Democrats such as House Speaker Nancy Pelosi (D-Calif.) and Senate Minority Leader Chuck Schumer (D-N.Y.) have both publicly supported stimulus payments. The HEROES Act, passed in May, included a broader amount of direct payments to Americans.

However, talks between Republicans and Democrats have stalled in recent weeks, with Republicans rejecting the more than $900 billion proposal in the HEROES Act to fund state and local governments. Republicans also did not favor extending a $600-per-week unemployment program, while Democrats sought to extend the program until next year.

Trump has accused Pelosi and Schumer of not wanting to come to an agreement on a CCP (Chinese Communist Party) virus stimulus deal because it could improve his chances for reelection in November. Meanwhile, Treasury Secretary Steven Mnuchin and Senate Majority Leader Mitch McConnell (R-Ky.) have both said that because of the election battle, it’s not likely a bill will be passed before then.

Senate Republicans last week attempted to advance a bill that would not include stimulus payments and a number of other benefits. However, it failed to clear 60 votes and was not taken up on the Senate floor.

Pelosi several weeks ago said Democrats would attempt to offer a concession, bringing down the price of the $3.4 trillion HEROES Act by $1 trillion, which Mnuchin rejected. 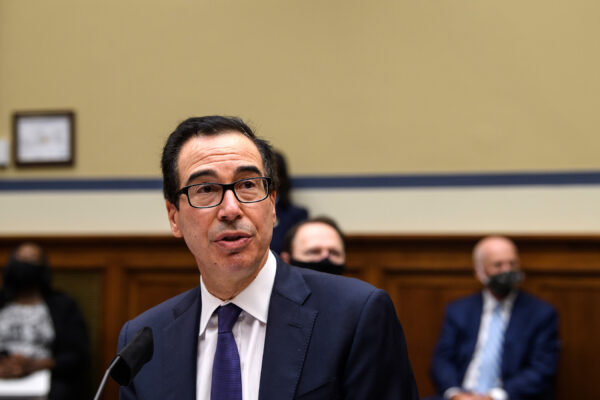 Pelosi again signaled that a bill worth less than around $2.2 trillion would not garner bipartisan support in Congress.

“We have come down,” Pelosi said of negotiation efforts to reduce the spending measure by about $1 trillion. “But the needs of the American people—we can only go so far.”

“This has accelerated since then,” she said. “We have additional needs for restaurants, airlines, and the rest, and those things have to be taken into consideration as well.”