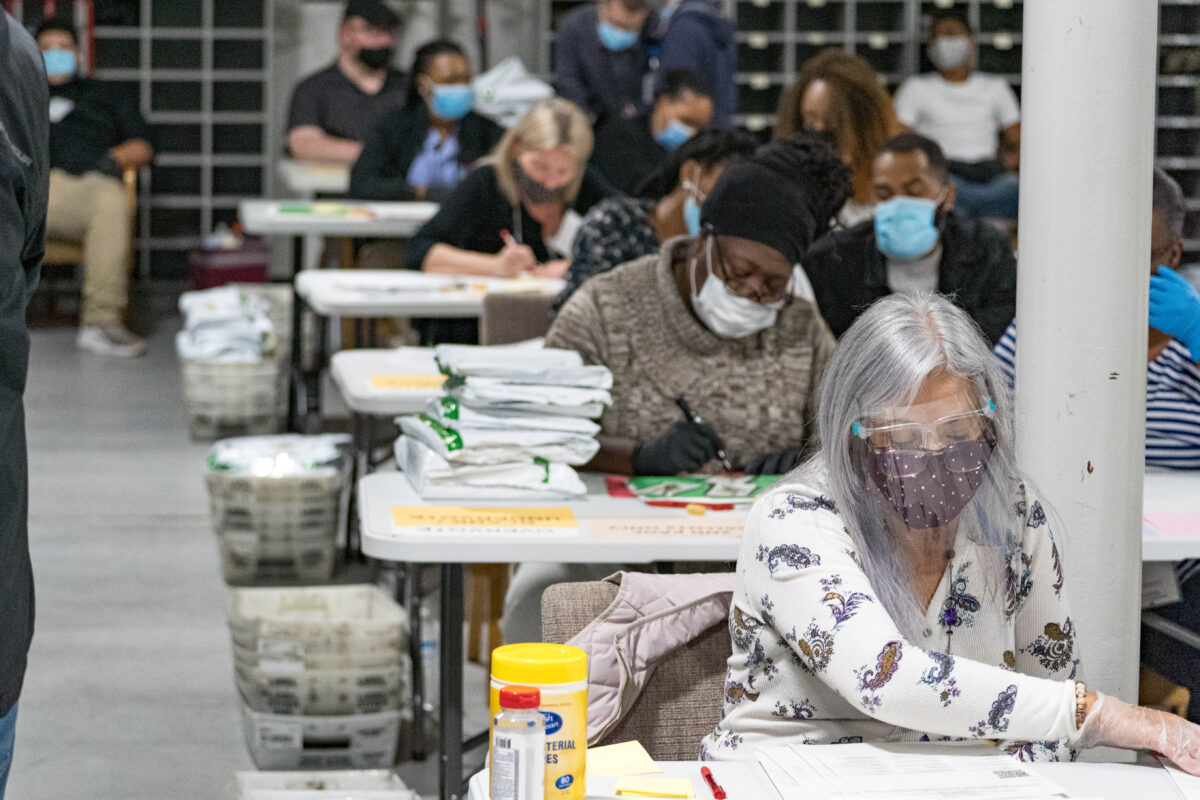 Georgia’s secretary of state said Monday that signature matching will not be possible for the state’s third count of votes set to begin Tuesday morning amid demands from the Trump campaign and Republicans to “conduct an honest recount.”

The office of Secretary of State Brad Raffensperger has repeatedly asserted that at this point in the process, signature matching is impossible because of state election rules designed to protect voter privacy. After initial verification, ballots in the state are separated from their envelopes, where the signatures are located. Raffensperger’s office has said this makes it impossible to reconnect the two after ballots are counted while the Trump campaign has alleged a lack of due process during the initial count, citing instances of voter irregularities, issues with voting machines, and poll watcher access.

The Trump campaign filed a petition for another recount in Georgia after the state finished its statewide risk-limiting audit of the razor-thin presidential race, involving a hand recount that the Secretary of State’s Office said “upheld and reaffirmed the original outcome produced by the machine tally of votes cast.” The Trump campaign has disputed the result arguing that “Georgia simply recounted all of the illegal ballots that had been included in the total.”

More than a dozen witnesses of the recount signed sworn affidavits attesting to errors and potential fraud, including Trump votes which were counted for Biden and suspicious batches of pristine, uncreased, and uniformly filled absentee ballots.

The risk-limiting audit turned up thousands of uncounted votes in four counties. A county-level report (pdf) showed that a total of 5,262 uncounted ballots were discovered in the course of the audit, with 2,464 in Floyd County, 1,642 in Gwinnett County, 732 in Dekalb County, 634 in Fulton County, 120 in Hall County, and 117 in Fayette County, along with a handful of others at less than 100 ballots. The additional ballots in Floyd County favored Biden by 92, those in Gwinnett favored Trump by 285, those in Dekalb favored Biden by 560, and Fulton County favored Trump by 345.

Trump and his campaign have repeatedly complained that the risk-limiting audit was meaningless without an examination of the signatures on the ballot envelopes.

“President Trump and his campaign continue to insist on an honest recount in Georgia, which has to include signature-matching and other vital safeguards,” Trump’s legal team said in a statement Saturday. “Without signature-matching, this recount would be a sham and again allow for illegal votes to be counted.”

“If there is no signature-matching, this would be as phony as the initial vote count and recount. Let’s stop giving the people false results. There must be a time when we stop counting illegal ballots. Hopefully it’s coming soon,” the statement continued.

During a press conference Friday, Georgia Gov. Brian Kemp urged the state’s top election official to conduct an audit of the signatures on ballot envelopes.

“It seems simple enough to conduct a sample audit of signatures on the absentee ballot envelopes and compare those to the signatures on applications and on file at the secretary of state’s office,” Kemp said.

The state’s second recount beings 9 a.m. on Nov. 24, and must be completed by midnight Dec. 2.

Gabriel Sterling, Georgia’s voting system implementation manager, said during a press briefing on Monday that there is no legal process in place in the state to allow signature verification as part of the recount.

“There’s no way to match [the ballot] back. The only remedy would be to throw out all absentee ballots … in a particular county,” Sterling told reporters. “I don’t think there’s a judge in the land that would throw out all those legally cast votes if there’s proof of a handful of illegally cast ones potentially, which, again, we’ve seen no proof or evidence that actually exists.”

Sterling said however that an audit to check the signature matching of local officials wouldn’t be easy but could be feasible if there is evidence it’s needed. Signatures on envelopes could be checked by auditors against signatures on voters’ registrations.

Sterling added that the secretary of state’s office doesn’t expect the recount to significantly change the results.

“The possibility of it changing, you know, it’s 2020, you never know, crazy things happen but the likelihood is very low. We don’t expect it to change, but you never know for certain,” Sterling said.

“When we did the first audit, we found mistakes in three counties and that added over 1,000 votes for President Trump,” Raffensperger told Fox News on Monday. “That has all been account for, and so I think this one will be very close to what we just have now. I don’t see much difference whatsoever.”