Sen. Mitt Romney (R-Utah) said he does not support the Senate Homeland Security Committee’s investigation into Hunter Biden’s on the board of Ukrainian energy firm Bursima Holdings.

On Wednesday, the panel authorized a number of subpoenas and testimony from former Obama administration officials, including former FBI Director James Comey, former Director of National Intelligence James Clapper, and former CIA Director John Brennan as part of their investigation into the Russia probe. They are also looking into a possible conflict of interest between Hunter Biden, who sat on the board of Burisma while his father Joe Biden was vice president, and the Ukrainian energy company that has long been accused of corruption.

Romney said the committee, led by Sen. Ron Johnson (R-Wis.), is trying to do political damage to Biden in the midst of an election season.

“I know the committee has undertaken two major investigations [that have] political implications and one, of course, is the, I’ll call it the Biden/Burisma investigation,” Romney told reporters. “And that, I think, from the outset had the earmarks of a political exercise and I’m fearful that comments made in the media recently have only confirmed that perspective.”

Romney added that “obviously, it’s the province of campaigns and political parties, opposition research, the media, to carry out political endeavors to learn about or dust up at one’s opponent.”

“But it is not the legitimate role of government, for Congress or for taxpayer expense, to be used in an effort to damage political opponents,” Romney said.

However, in May, the Utah senator voted alongside Republicans on the panel to issue a subpoena to Blue Star Strategies, which is connected to Burisma.

Johnson, meanwhile, said that his panel will issue a report before the Nov. 3 election on Hunter Biden’s activities in Ukraine.

Johnson’s office has not responded to a request for comment on Romney’s allegations. He also hasn’t made any public statements about them. 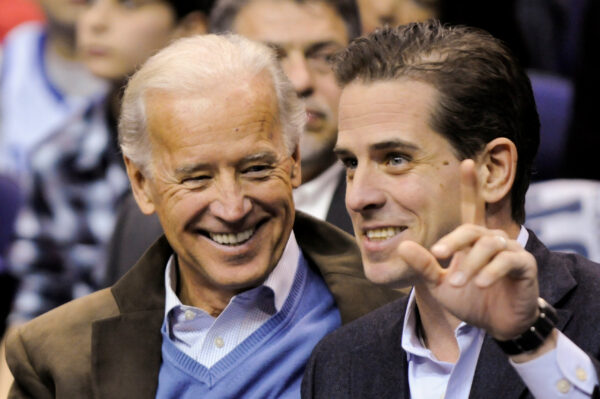 A spokesman for Johnson, Ben Voelkel, told The Associated Press that “the American people have the right to know” the facts of the investigation.

“This is Congress,” Voelkel said. “Everything here has implications for politics and elections. The Committee is expressly authorized to investigate conflicts of interest, and its investigation into Burisma and U.S.-Ukraine policy began well before the Democratic nominee for President had been decided.”

Hunter Biden’s reportedly lucrative position on the board of Burisma while his father was in office has drawn Republicans’ ire, although both Bidens have said they haven’t engaged in any corrupt activities. Burisma and the Bidens came up during a July 25 phone call between Trump and Ukrainian President Volodymyr Zelensky, which became the focus on the House Democrat-led impeachment inquiry.

Ukrainian officials have been investigating the founder of Burisma, Ukrainian oligarch Mykola Zlochevsky, for money laundering, tax evasion, and corruption. His whereabouts are currently not known.

Masooma Haq contributed to this report.