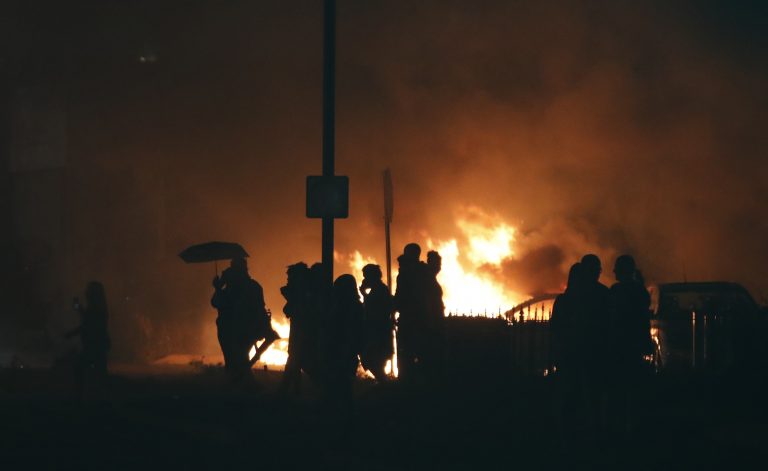 In a record-breaking year for gun buying, the biggest spike in firearms purchases came as protests and riots broke out across the nation in June, a Washington Free Beacon analysis of FBI data indicates.

While March saw the most guns sold thus far in 2020, seasonally adjusted data show that it was June—the month after the death of George Floyd and subsequent onset of protests and civil unrest—that most exceeded expectations, massively outpacing usually languid summertime sales.

That suggests images of stores being looted and buildings being burned across many of America’s largest cities drove citizens to purchase guns at even higher rates, relative to usual seasonal patterns, than the onset of the coronavirus pandemic. David Kopel, a Cato Institute scholar with decades of experience in gun research, told the Washington Free Beacon the sales spike is clearly a response to the violence.

“Crime in general is a driver of gun sales,” he said. “And that includes not just individual criminals, but it also includes criminals who operate in large groups like rioters and looters. We had nationwide riots, mass violence, and police often ordered not to interfere or even overwhelmed. People understood more than ever that they have to be their own first responders.”

The spike in gun-buying was apparent in most states, suggesting that residents are attuned to the disorder in many major cities. That, in turn, may have implications for the 2020 election, as law and order increasingly draw the attention of agitated voters.

“These are people where the gun ownership argument was all theoretical up until 2020. Well, now it’s a matter of existential questions,” Mark Oliva, a spokesman for the National Shooting Sports Foundation, told the Free Beacon about new gun buyers. “It’s, ‘Am I going to be able to protect myself and my family in a time of crisis?’ Those people have already voted. They’ve made their decision on where they stand on this. They went and bought a handgun.”

Gun sales exploded in 2020 as the coronavirus pandemic prompted Americans to stock up. March, in particular, broke records, with over 2.5 million guns sold. Subsequent months similarly shattered records compared with the same month in the past year—July, for example, saw 1.8 million as gun industry earnings tripled—but March remains the overall record holder.

The onset of the coronavirus crisis is not the only reason so many Americans bought guns in March, however. Gun sales demonstrate what statisticians call seasonality—rising and falling in a cyclical pattern over the course of the year. In particular, gun sales increase through the spring, peaking in March as retailers bring in new products and try to clear out previous-year models, then fall through the summer before rising steadily through the fall hunting season and the pre-Christmas months.

Standard statistical techniques allow for “seasonally adjusting” data to show what the trend would look like absent this pattern. In the case of the FBI background check numbers on which gun-sales estimates are based, seasonal adjustment gives a sense of gun sales independent of the monthly rise-and-fall pattern described above, showing a “truer” trend line. 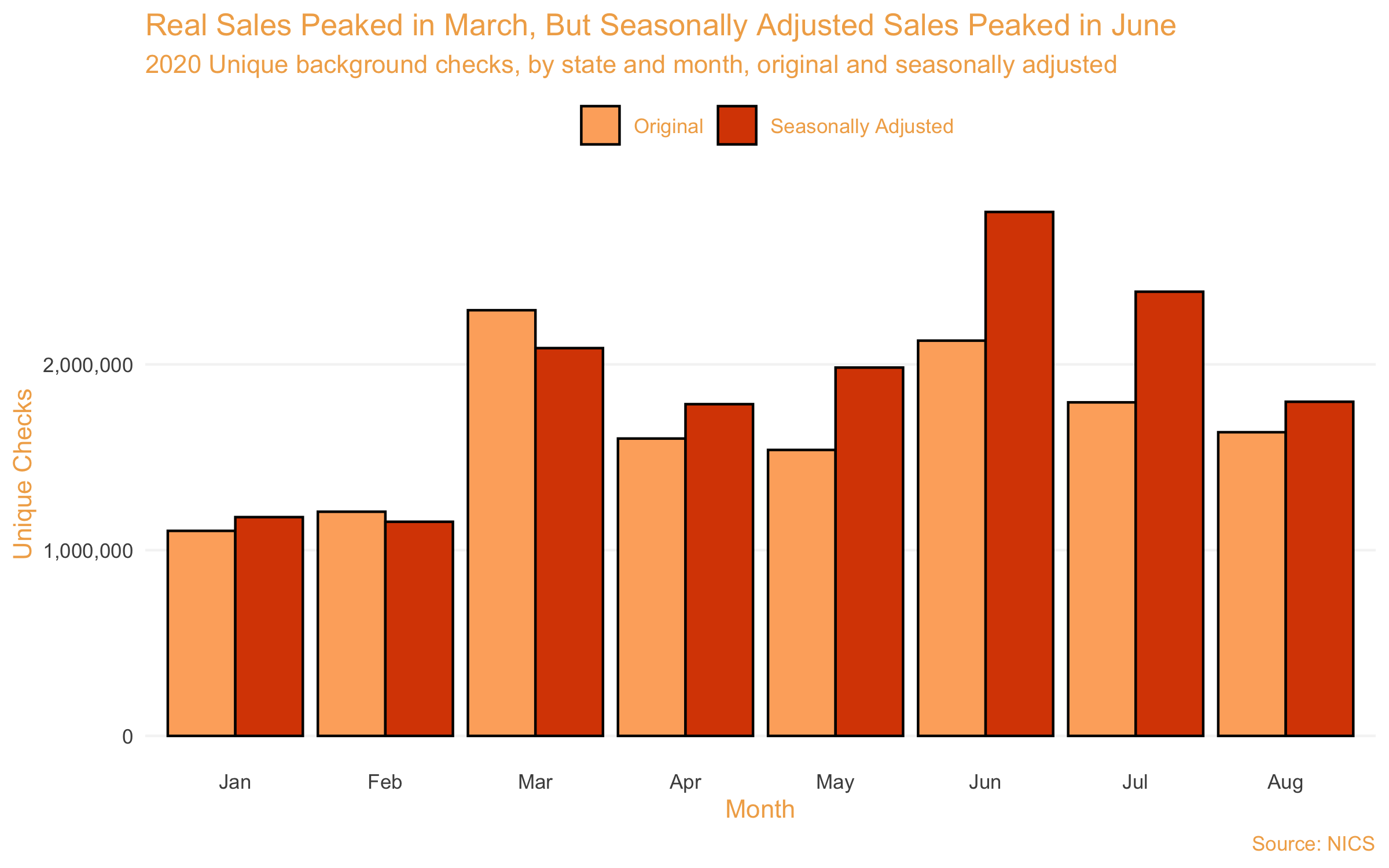 Such analysis reveals that while actual unique background checks peaked in March, it was June—usually the low point of the gun-buying season—that saw the biggest seasonally adjusted increase, ranking as the number one month for sales in 2020. Accounting for the fact that June usually sees the lowest rates of gun sales, in other words, June 2020’s spike was the largest of the year—in fact, the biggest seasonally adjusted figure in over 20 years of data.

In other words: While more guns were sold in March than in June, June 2020 was a bigger outlier once seasonal effects were accounted for—implying that the civil unrest that began in June drove a bigger relative increase in gun purchasing than the onset of the coronavirus crisis in March did. 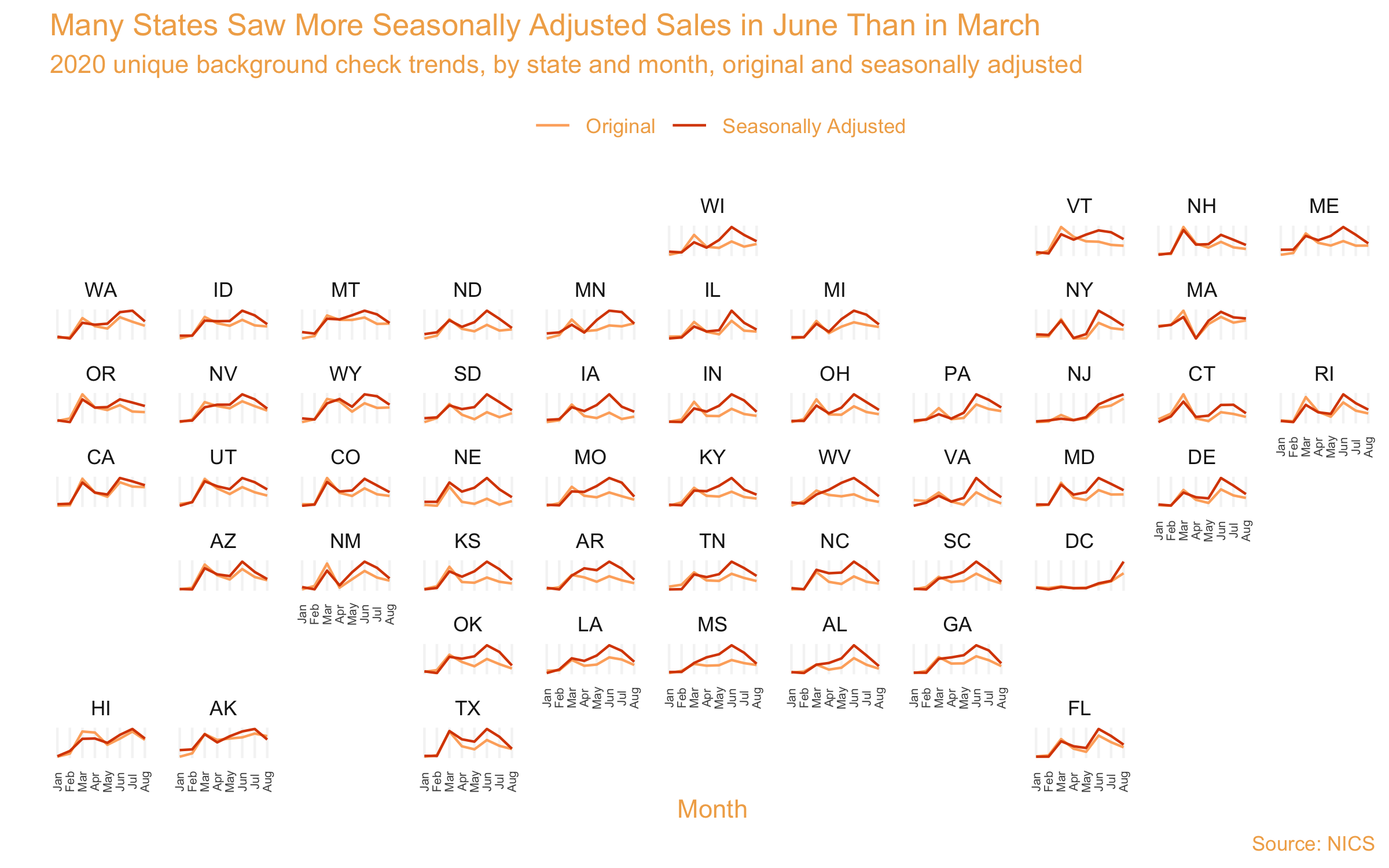 A similar trend is apparent at the state level. Many states saw record highs in March, with lower but persistently strong purchasing through the summer. But adjusting for seasonal effects, many of those same states saw historic highs for sales in June—coincident with the onset of protests and riots.

Both trends may reflect Americans wary of growing violence in their community. Murders and shootings have spiked in major cities across the country, as large, sometimes violent protests tax police resources past their breaking point.

June’s hot month for gun sales is another indicator of the rising salience of crime to the American electorate. President Donald Trump and Democratic presidential nominee Joe Biden have traded jabs in recent days, with both traveling to Kenosha, Wis.—the site of further unrest after the police shooting of Jacob Blake—to charge the other with fomenting disorder.