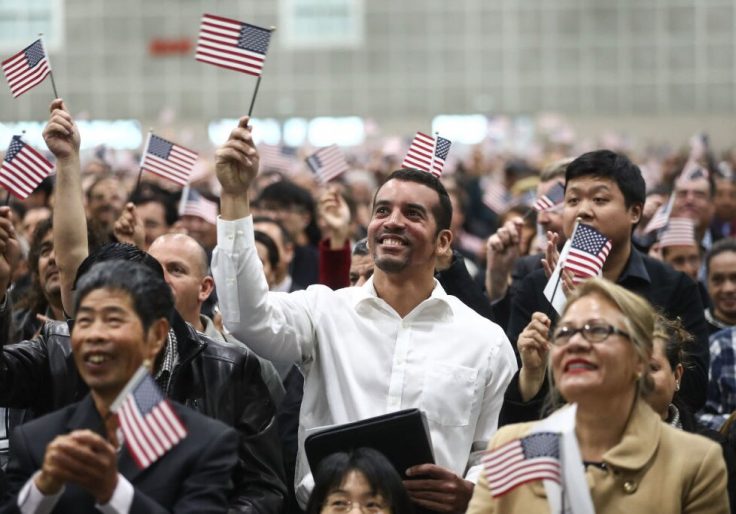 On the eve of World War II, there were roughly 130 million Americans, some 6 percent of the world’s population. By comparison, mainland Japan had 72 million, Germany 69 million, and Italy just 43 million. Only the Soviet Union—168 million—could match the United States man-for-man.

Though tactics and strategy mattered, the eventual Allied victory can be explained by these figures. The immense war-fighting might of America came first and foremost from its people.

Today, America’s share of the global population has declined to just over 4 percent. It will likely keep withering. The Census Bureau reports that in 2019 “natural increase”—the number of births less number of deaths—was less than a million for the first time in decades; annual immigration was around that level too. Meanwhile, other countries—India, fast-growing Nigeria, and particularly China—are set to or already vastly outnumber the United States.

Of course, America has certain advantages baked in. We are more technologically advanced, more productive, and reap the benefits of a tradition of liberty and constitutional democracy. But the key point of One Billion Americans, the new book from Vox‘s Matt Yglesias, is that to remain global top dog and compete with the 1.3 billion-man dragon, America is going to need a heck of a lot more people.

Yglesias is a liberal, though a frequent gadfly of the more-progressive left. His is rarely a popular voice among conservatives, and some of his discussion of conservative policy views, in One Billion Americans and elsewhere, amounts to filleting strawmen. But the basic idea of the book, that America needs to commit to remaining the world’s most powerful, productive nation, is a project that conservatives should emphatically support. Because Yglesias is right: We need more people.

There are myriad returns to population growth. Some of them scale linearly—the more people who produce things, the more consume. Others pertain to age structure: As the Baby Boomers cross 65, America is projected to have about two workers per retiree, an unsustainable ratio.

But population growth can also have more-than-linear returns, producing the benefits that can only exist when enough people come together, through more refined diversification of labor or agglomeration effects. And population growth can make beneficial low-probability events more common—if the chance of an Einstein is one in a million, then adding 700 million Americans means 700 more Einsteins, with all the benefits they bring.

If that sounds too technical, think about it this way: More people means not just more of the same, but more chances for the new and better. The long-run decline of the U.S. population, by contrast, will mean a stingier, less creative country. America’s greatness is in its people—who doesn’t want more Americans?

Much of One Billion Americans is concerned with the policy question of how to actually achieve Yglesias’s milestone. His proposals break down roughly into three sections, of varying quality: encouraging more kids, increasing immigration, and making it easier to actually live in the United States.

On the kids front, the number of kids a woman can expect to have in her lifetime has dwindled since the Great Recession, down to 1.7 in 2019. That’s not only below the number needed to replace the population (2.1)—it’s also fewer than most Americans say they want, as demographer Lyman Stone has documented. A baby bust is bad for the economy, and for national greatness, but it’s also just bad for the millions of Americans who want to be parents but aren’t.

In asking how to get those numbers up, Yglesias focuses mostly on the rising cost of childrearing and how government interventions can socialize those costs. Some of these ideas have merit—the costs of childrearing are generally internalized to parents, while society reaps the benefits of 18 years of raising another worker. It makes sense to balance that out with paid leave or with child transfers of the sort that command support even on the right.

But others—like creating universal daycare—put too much trust in public services, given the evidence of adverse effects of such government-run programs. And Yglesias’s focus on costs alone is both too narrow and too wide. He does not discuss both deeper causes of the fertility drop, like declining marriage rates, and more mechanical drivers, like the rise of elective c-sections.

Conservative readers are likely to most object to Yglesias’s discussion of immigration, not least because it is peppered throughout with lame dismissals of the restrictionist view as exclusively xenophobic and racist. Yglesias evinces a passing familiarity with Harvard’s George Borjas, the leading economist of immigration skepticism, but only in the context of his long-running dispute with David Card. He might have done well to consult Reihan Salam, his former Atlantic colleague and current Manhattan Institute president, who makes the case against mass low-skilled immigration.

That said, Yglesias is probably right that a bigger America will need not only more babies but more immigrants, who currently account for roughly a fifth of annual increase. To his credit, he acknowledges that our system should select more on the basis of merit (as is the case in Canada and Australia) and less on the basis of being loosely related to someone already living here. His discussion of place-based visas, in which individual states or cities bring in immigrants, revitalizing now-drained American centers with people who want to work hard and participate in the American dream, is worth weighing.

Speaking of cities, Yglesias is on far stronger footing in the three separate chapters about making American cities and states better places to live. (One gets the sense that he pitched a book about urban renewal policy, and a savvy editor told him that wouldn’t quite sell without a catchy tag line.) One of the main arguments against population growth is that density can lead to unpleasantness—traffic jams, pollution, etc.—and Yglesias’s response is that America has a great deal of available space that simply needs to be made more livable.

That means in part trying to revive the dozens of American cities with shrinking population, hollowed out by deindustrialization. Cities like St. Louis and Detroit have the raw stuff to be great once again—they just need more people, and more jobs and infrastructure to attract those people. Policymakers can lead the way on this, for example, by carefully decamping federal and state government agencies, which are major employers, across the country. Government subsidy can induce companies to relocate to underserved cities too, a trend that will likely be hastened by the post-pandemic rise of telework anyway.

But those cities where people do want to live can be improved, too, and with deregulatory approaches conservatives should support. Yglesias backs slashing land-use regulations, particularly to encourage homebuilding in uber-expensive cities like New York and San Francisco. More supply means lower prices, which means more people can buy homes and build lives. Yglesias also has an aggressively wonky discussion of transportation reform, the basic point of which is that Americans could get around a more-dense country faster and more comfortably with just a little effort.

Whether or not one agrees with Yglesias’s policy vision, though, is to some extent beside the point. As he notes at the start of the book, “There’s no way that all the specific ideas in this book will ever command broad consensus in American society. But I think the big picture idea of the book, that America should try to stay number one, already does.” And Yglesias is right that if we really want to beat a nation of 1.3 billion, adding hundreds of millions of Americans would surely help.

Conservatives, in other words, can and should offer a variety of counterproposals to Yglesias’s. But the basic project, the agreed-upon means to renew American greatness and preserve our world-straddling dominance, ought to remain the same: one billion or bust.