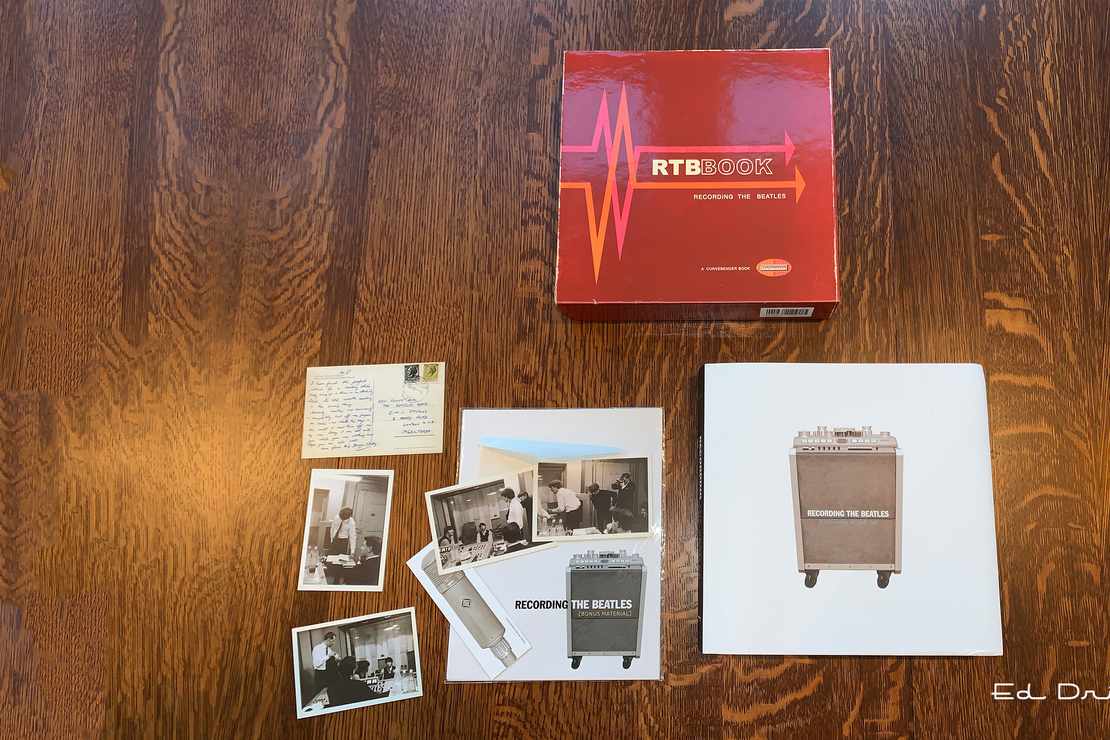 The sound of the Beatles’ records is a combination of the brilliant songwriting of John Lennon and Paul McCartney (and increasingly, as the 1960s went on, of George Harrison), but also the sound of the technology available to producer George Martin and his recording engineers at EMI Recording Studios in London. But in a way, those elements are true of every piece of recorded music: when an artist gets it right, it’s a magic combination of the song, the performance, and how it was recorded. Or as George Harrison said in an early 1990s interview that was quoted in the introduction to the brilliant 2006 book, Recording The Beatles:

If you listen to the music of the Twenties and Thirties, it has a certain sound to it; it’s partly the song that you like, and it’s partly the way it was recorded, the tube amplifiers in the boards, how the microphone sounded in those days, all the kind of atmosphere. It becomes like a little period piece, just like a piece of furniture of a given period, it has its own charm. You wouldn’t want to hear The Beatles doing ‘Mr. Kite’ on a 48-track machine. It wouldn’t have the same charm.

Most coffee table books are full of pretty full-color photos on glossy paper, and the text is of secondary value. However, while 2006’s Recording The Beatles is heavily illustrated with the requisite new and vintage photos of Abbey Road Studios and its myriad of surviving ‘60s-era gear, for recording enthusiasts, there is a treasure-trove of information to be learned here.

Diving into the Magical History Tour

The book is laid out in quite a logical fashion. First, there’s a history of EMI Recording Studios in London (which were rebranded in 1970 as “Abbey Road Studios” to take full marketing advantage of the Beatles’ best-selling epic swan song). Then there are profiles of the people who worked there during the Beatles’ run from 1963-1970. Producer George Martin, his best-known engineers, including Norman Smith, who crafted the sound of the Beatlemania-era records before going off to produce the first two albums by Pink Floyd.

Then Geoff Emerick, who helped crafted the combination of psychedelia and in-your-face drums on Revolver, Sgt. Pepper and the Magical Mystery Tour era, before returning for Abbey Road. And the other engineers who worked the Beatles’ sessions, including another future Pink Floyd ally, Alan Parsons. Plus a look at how they were all trained by EMI, and their apprenticeships before being allowed into the recording studio.

Next, there’s a look at the equipment that graced EMI London during the Beatles’ career, and a look at how that technology evolved from 1963 to 1970, including extremely technical details of the mixing desks that were used to record the Beatles. Regarding the latter, the authors note:

This portion of the book involves much greater technical detail than the other chapters. It is intended to satisfy those “studio-types” who understand and seek accurate detailed information on the desks used to record the Beatles. As such, it may be too deep for the novice at times, although several significant concepts here do affect the Beatles records. If this section seems too difficult feel free to skim it over for just the interesting points and move forward through the book.

In addition to the granular-level study of EMI’s 1960s-era recording desks, “studio-types” will also marvel at the attention to detail given to such key elements of the Beatles’ sound as the Fairchild compressor, so beloved by Geoff Emerick for Ringo’s drum sound, down to how the controls are set. Even those who have software emulations of the Fairchild will benefit from this information.

Along the way, detailed explorations at how that equipment was customized — and in some cases invented — by EMI’s back-room boffins, and how the engineers who recorded the Beatles used it as well. Finally, with all of that background firmly established, there’s an exploration of each Beatles album, and how it was recorded.

Beatling About in the 21st Century

There’s much to be learned here, and much that can be applied to today’s world of digital audio workstations (DAWs) and plugins. Particularly since quite a bit of the equipment that was used to record the Beatles is now available in either plugin or hardware form. Waves Audio and Softube have replicated (with varying degrees of accuracy) licensed plugin versions of Abbey Road’s studio console features and equipment that was custom-built by the studio’s backroom boffins, and Iowa’s Chandler Limited sells licensed hardware versions of much of that vintage gear as well.

Arguably, only the Fairchild Compressor is in the purely “unobtanium” level pricing and serviceability levels, with modern hardware clones starting at over $10,000.00. But numerous plugin versions are available at much more reasonable prices, such as Waves’ “Puigchild,” (named after producer Jack Joseph Puig) and Overloud’s excellent Comp670. The book is also a reminder that in today’s world of DAWs, there are plugins that can create virtually any effect, and programs for the computer such as Izotope’s RX8 can cleanup and enhance recordings, in the 1960s, the engineers who recorded the Beatles had to do all of this with vacuum tube-driven analog equipment, what Star Trek’s Mr. Spock would describe as “stone knives and bearskins”-era technology

Recording The Beatles goes into great depth into the control panel settings of the hardware used to record the Fab Four, and microphone placement. It’s also a reminder that recording rock and roll bands has drastically changed, post-Napster. Because the Beatles were signed to EMI, and the giant recording label knew what a cash-cow they had on their hands, the group was not charged for studio time. As a result, Alan Parsons, who began his career as an engineer on Let It Be and Abbey Road, wrote in his how-to guide, The Art and Science of Recording, “The Beatles had a recording budget from heaven. No one would ever say they’d have to cut down on their studio time.”

There was also a definite division of labor. The Beatles played, the engineers placed (and for the most part chose) the microphones, George Martin supervised the sessions as producer, and wrote the arrangements. Martin and his main engineers, Norman Smith, and then Geoff Emerick, each had definite ideas for how “the boys” should sound. Each engineer was an expert in choosing microphones, but Smith went for a live “in the room” sound, whereas Emerick wanted a more detailed sound, with the drums mic’ed much more up front, and the bass guitar more clearly defined, which is why the Beatles sound began to change so radically with Revolver. And while the Beatles might discuss these sonic choices with Martin and his engineers, they largely let the engineers get on with getting their sounds.

In contrast, 99.9 percent of today’s bands don’t have “a recording budget from heaven.” Far from it — a band newly signed to a record label might be lucky enough to be able to afford to rent a studio for a day or two to record the initial drum tracks, and then all of the parts would then be recorded later in their home studios in front of a computer and audio interface, with band members acting as both musician and engineer, before the producer mixes everything down to (hopefully) something cohesive.

And course, there’s the sheer talent of the Beatles’ songwriting and their playing. While, as Harrison alluded to above, the recording process was directly tied into the sound of the Beatles’ psychedelic mid-‘60s songs, the Beatles’ best songs would still sound like great songs recorded with today’s equipment. The reverse isn’t true of many of today’s stars, who would sound even more threadbare if they had to do without 21st century technology like auto-tuning, comping, plugins, non-destructive digital editing, and endless amounts of digital tracks.

Fortunately, the two worlds now exist quite nicely. Capturing sounds using Beatles-era microphones and pre-amps, and then editing them in a modern DAW is the best of both worlds, with great tones upfront, and endless flexibility afterwards. You probably won’t channel the zeitgeist the way the Beatles could, but it’s definitely possible to learn from them — and the technical team who recorded them — to enhance your own efforts. And in that regard, Recording The Beatles succeeds brilliantly.

While it’s not — yet — in Fairchild Compressor level pricing, it’s getting into unobtanium-level pricing on its own terms, but well worth it for those both obsessed with the Beatles, and with the recording process. Highly recommended for those who fit both criteria. (One suggestion: see if your local library can get a copy on inter-library loan.) In 2019, the authors promised an updated version which will likely be at much more affordable prices; while our current unpleasantness has no doubt slowed their efforts, I hope it hasn’t stopped them.