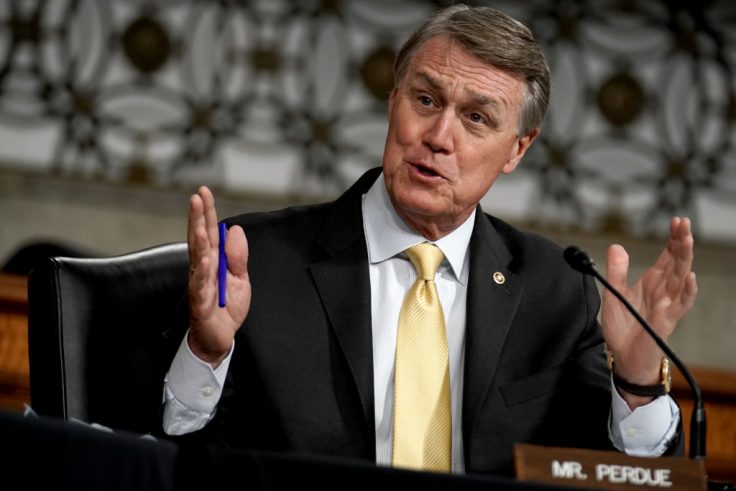 Sen. David Perdue (R., Ga.) has been exonerated in three separate investigations of stock trades that were scrutinized at the outset of the coronavirus pandemic, his campaign announced Wednesday.

The Department of Justice, Securities and Exchange Commission, and Senate Ethics Committee concluded over the summer that Perdue engaged in no wrongdoing with his stock purchases and sell-offs earlier this year, which drew charges he profited from insider information about the pandemic.

Perdue’s opponent Jon Ossoff and Democratic allies have made Perdue’s trades a centerpiece of their attacks. One Ossoff ad implied Perdue attended a private Jan. 24 Senate briefing on coronavirus and then “lined his own pockets,” although Perdue was not present at that briefing. Another ad from the Democrat-aligned Senate Majority PAC called Perdue “sleazy.” Ossoff, who runs an investigative journalism documentary company based in London, often cites his battles against corruption as a selling point for his campaign.

Critics pointed to Perdue’s purchase of stock in a chemical company that supplies personal protective equipment and his sale of casino stock earlier this year. However, he also sold stock in the grocery store Kroger and invested in the clothing store Urban Outfitters shortly before it closed, both moves that contradict charges he used the pandemic to his advantage, the Atlanta-Journal Constitution reported. Perdue’s team said he cooperated fully with investigations into his finances and all of his stock trades were handled by third-party advisers.

A new ad from Perdue that will air Thursday attacks Ossoff and Senate Minority Leader Chuck Schumer (D., N.Y.) for “lying” about his transactions in recent advertisements.

“Jon Ossoff and Chuck Schumer have been caught in a lie,” the narrator says. “Senator Perdue welcomed a full review of his stock trades, and the Department of Justice, the SEC, and even the bipartisan Senate Ethics Committee cleared him completely. Despite that, Ossoff and Schumer continue the lie, spending millions to hide their radical socialist agenda. What else are they lying about?”

Perdue communications director John Burke told the Washington Free Beacon it would not be the last time Ossoff is “caught lying.”

“Jon Ossoff talks a big game about exposing so-called corruption,” Burke said. “Making films for Al Jazeera and foreign-based companies is not fighting corruption. While Ossoff may be good at peddling films for scandal-plagued media outlets, Georgia voters are too smart to buy his propaganda.”

Perdue holds a narrow polling lead over Ossoff, who has never held office and seeks to be the first Democrat to win a Georgia Senate race since 2000. Perdue, a strong ally of President Donald Trump, is running for a second term.