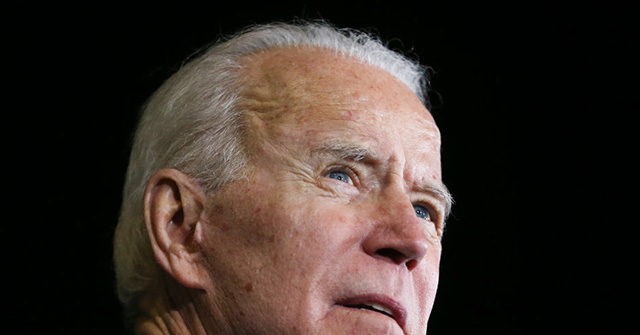 The Boilermakers Local 154 union, which represents thousands of American workers in Pennsylvania, West Virginia, and Ohio, is calling out Democrat presidential candidate Joe Biden for lying about having been endorsed by the union.

At a televised town hall event this week, Biden made the false claim that the Boilermakers union “overwhelmingly” endorsed him, saying he “sat down with them” to discuss his energy plan in which he has said he will ban fracking.

As Breitbart News noted, the Boilermakers Local 154 union endorsed Trump, as they did in 2016, last month. Union leader John Hughes called out Biden for the lie in a press call on Saturday.

“The other day I’m watching the debate and I see Joe Biden tell everybody that the Boilermakers endorsed him and that is not true,” Hughes said. “And I would like somebody to tell me who — he said he talked to somebody — I’d like to know who he talked to in the Boilermakers because anybody I talk to did not endorse him.”

I couldn’t believe it when Joe Biden blatantly lied at a town hall right here in Pennsylvania and said he was overwhelmingly endorsed by the Boilermakers.

As a matter of fact, Boilermakers Local 154 endorsed President Donald Trump last month. And I knew this first-hand because I worked with John Hughes, the business manager, and Local 154 on that endorsement.

In the union endorsement of Trump, Hughes called the president “true friend of the Boilermakers.” Hughes said union members and their families “rely on coal-fired power generation,” which is at great odds with Biden and Sen. Kamala Harris’ (D-CA) energy plans that take cues from the Green New Deal to phase out all fossil fuels.

The Green New Deal would have a devastating impact on working and middle-class American communities who rely on energy industry jobs.

Numbers provided to Breitbart News by Senate Energy Committee insiders shows that at least about one million energy jobs would be eliminated from the American economy as a result of the Green New Deal. This includes 712,300 jobs in mining, quarrying, and natural gas extraction and another 116,500 jobs in petroleum and coal products manufacturing.