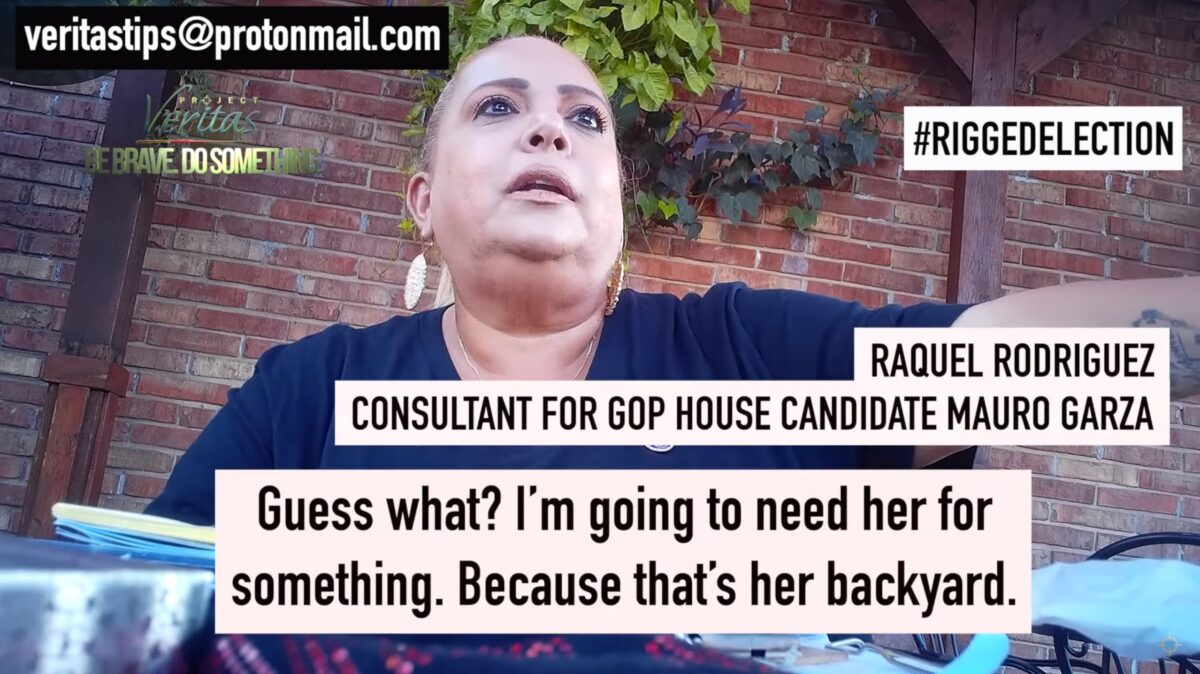 A former congressional campaign volunteer was recorded on hidden camera saying she can deliver thousands of votes for tens of thousands in cash. She also indicated she’s done so before and boasted about her influence with elected officials in Texas who owe her “favors.”

The woman was filmed by one or more undercover reporters with Project Veritas, an undercover journalism nonprofit that has released two videos detailing her conduct.

In the first video, now under investigation by Texas Attorney General Ken Paxton, the woman can be seen attempting to switch an individual’s vote toward the Democratic Party in Texas.

She said in the video she was a “consultant” for GOP congressional candidate Mauro Garza, but was seen in one clip attempting to persuade a voter to cast a straight Democrat ballot.

“This is what you call flipping people!” she was recorded as saying, also noting that she “could go to jail” for what she did.

It is illegal under Texas law to influence or improperly assist a voter while voting.

Veritas identified the woman as Raquel Rodriguez. Garza confirmed Rachel, or “Raquel,” Rodriguez is indeed her name. He said she volunteered for his campaign, but no longer does. The Epoch Times couldn’t reach her for comment. When Veritas founder James O’Keefe confronted the woman in public with some of the recordings, she said she didn’t want to talk and that she didn’t break any law.

In the second video, she is seen detailing the pricing of her services.

The reporter seemed to pretend he wanted to hire Rodriguez to get votes for Democrat Senate candidate MJ Hegar and Democratic presidential candidate Joe Biden.

The video seems to date to around Oct. 16, since Rodriguez is heard as saying it was 16 days until election day.

In another clip, when the reporter reiterated the deal back to her, she interrupted him:

“Quit saying that. Yea, we know the numbers. You’re making me nervous now.”

For a city council race, the rate for her services, including her partner, would add up to $71,000 for about seven months, she said.

She said she’s been doing the same for other candidates, but her rates went up.

“The prices are going up only because of the fact that I’ve got more data. I’ve registered more people. Because—not only that, I’m going to be more grounded,” she said. “We’re talking the connections I have. You’re not only getting me, you’re getting my connections.”

Republican congressional candidate Mauro Garza first paid her $5,000 a month, but then opted for more comprehensive services for $8,000 a month, she said.

Garza disavowed her conduct and called for an investigation.

“I do not endorse or support any wrongdoing or voter fraud. If any member of my campaign team, paid or volunteer, engages in or gives the perception of any negligent behavior or threatens the integrity of voter registration or engages in voter fraud, they will be immediately fired and turned over to the County elections office and law enforcement,” he said in an emailed statement.

“The volunteer in the investigative video no longer serves on my campaign. I hope that this story encourages the news media and legal authorities to investigate all evidence of voter fraud and suppression as it has been a rampant problem for decades in South Texas.”

He asked for “patience” from his supporters “and a thorough investigation to secure the integrity of our elections.”

Rodriguez explained she sometimes opts for favors instead of cash for her services.

Renee Yanta, Republican candidate for the Texas Fourth District Court of Appeals, paid only $700 for services other candidates had to pay $3,000 for, Rodriguez said.

“What does she owe me? Favors,” she said.

“I have a state rep [representative], I have a [state] senator right now. I’m talking in my pocket. State rep, senator, commissioner, judges,” she said. “I haven’t needed any of them.”

Yanta’s campaign didn’t respond to a request for comment.

Rodriguez identified the state representative hopeful as Liz Campos, the Democrat running for District 119. Rodriguez said she helped Campos win her primary, but the candidate couldn’t afford her services for the general election. Rodriguez said she’s providing the services anyway.

“You know what I told her? ‘I respect you. You’re going to owe me, okay? Just remember what I’m doing for you,’” she said.

“She’s okay with that?” the reporter asked.

Campos’ campaign didn’t respond to a request for comment.

The state senator in question was Republican Pete Flores, she said.

Flores’ campaign didn’t respond to a request for comment.

Rodriguez indicated her job, at least in some cases, was to help elect a Republican for a local office, but have the voters still vote Biden for president.

“Some of my Republicans are precinct chairs that cannot be known because they could get kicked out, but they want to help the Biden, so that’s how they’re helping me with my Dems,” she said.

“These Republicans want to help Biden too?” the reporter interrupted.

“Yeah. That’s what I’m doing. That’s exactly what I’m getting paid to do,” she said.