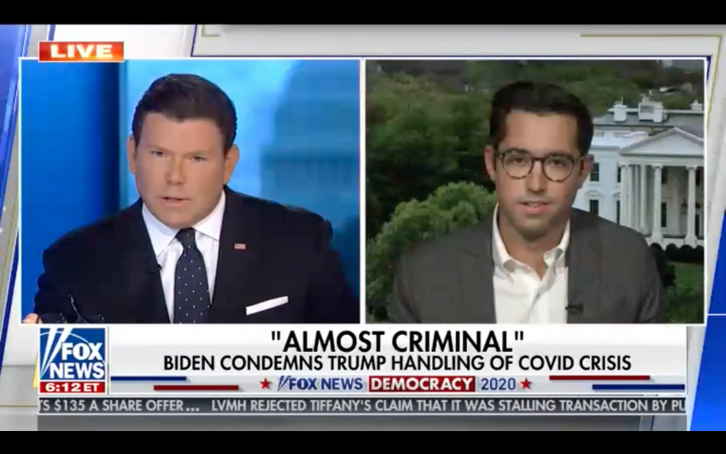 Joe Biden’s national press secretary claimed Thursday that the former vice president was in favor of President Donald Trump’s decision to restrict travel from China, but all of Biden’s public comments, including from the day the decision was announced, indicate otherwise.

“Joe Biden has been clear that he was not against that travel ban at the time,” TJ Ducklo told Fox News anchor Bret Baier. Ducklo’s claim contrasts with Biden’s previous statements on the travel restrictions, including some made on the very day the policy was announced. Less than an hour after Health and Human Services secretary Alex Azar declared the coronavirus a public health emergency and announced the China travel ban, Biden took the stage at a campaign event in Iowa and went after Trump’s “hysterical xenophobia.”

“This is no time for Donald Trump’s record of hysteria xenophobia [sic], hysterical xenophobia, and fear-mongering to lead the way instead of science,” Biden said.

That same afternoon, Biden took to social media to complain that Trump was “adding more countries to his list of who’s not welcome in America,” with an implicit comparison of the restrictions on China to the so-called Muslim ban Democrats opposed. Biden doubled down on accusing Trump of xenophobia the next day.

“We need to lead the way with science—not Donald Trump’s record of hysteria, xenophobia, and fear-mongering,” he wrote.

Biden in the following weeks repeatedly expressed doubt about the efficacy of travel restrictions, even into March when infections began spreading to the United States from abroad. On March 12, Biden tweeted that “banning all travel from Europe—or any other part of the world—will not stop [the coronavirus].” On March 18, Biden accused Trump of “xenophobic fear-mongering” in response to Trump citing the travel restrictions on China as evidence he took effective action to combat the virus.

Ducklo dodged further questions from Baier specifically asking whether or not Biden explicitly supported the ban. He also refused to answer questions during the interview about whether Biden was using a teleprompter during television interviews and virtual discussions with voters.