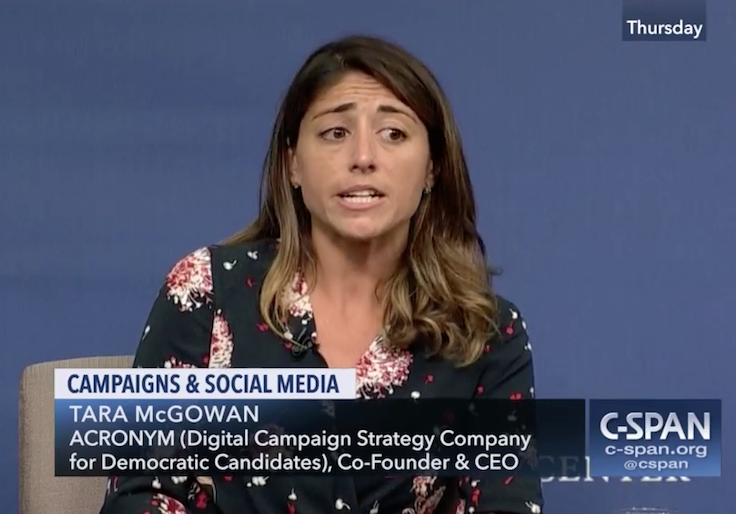 McGowan appeared alongside “young climate activist” Vic Barrett and comedian Ilana Glazer (who has partnered with McGowan to boost turnout in swing states) at a Times-sponsored discussion on mobilizing young people in the 2020 election. Moderator and reporter Nick Corasaniti introduced McGowan as CEO of ACRONYM, “a political nonprofit which promotes Democratic and liberal candidates.”

Neither McGowan or Corasaniti mentioned Courier Newsroom, the network of “local” news sites ACRONYM created and still owns in part, and which CNN, Democratic operatives, and Facebook have labeled a distributor of fake news.

McGowan’s appearance at an event hosted by one of America’s premier media outlets is the latest example of her embrace by some in the media in spite of her alleged journalistic malpractice. Her continued elevation suggests that some decision makers at outlets such as the Times have prioritized giving McGowan a platform over questioning her trustworthiness as a source.

Neither the Times nor ACRONYM responded to requests for comment for this story.

McGowan parried criticism of the Times event on Twitter, responding to a popular right-wing account’s description of Courier as a “dark money fake news apparatus” by calling herself “the leader of a dark money nonprofit that invested in a real progressive news network to counter fake news that is destroying our democracy on sites like this one.”

McGowan has erected a Democratic organizing powerhouse, funded by liberal billionaires including LinkedIn founder Reid Hoffman, Dollar Shave Club CEO Michael Dubin, and Laurene Powell Jobs, widow of Steve Jobs. The product of those dollars includes Courier, which runs a series of “local” news sites that push pro-Democratic talking points in swing states McGowan and her team have identified as must-wins in 2020.

Those tactics have drawn criticism from across the political spectrum. Gabby Deutch of the nonpartisan media watchdog NewsGuard labeled Courier “hyperlocal partisan propaganda,” while CNN’s Jake Tapper and Brian Stelter mentioned Courier as part of the spread of “pink slime” sites using a similar strategy, and Anna Massoglia of the Center for Responsive Politics wrote that Courier is “part of a coordinated effort with deep ties to Democratic political operatives.”

Tuesday’s event is not McGowan’s only brush with mainstream acceptance. She is slated to speak on a panel on Thursday alongside journalists from the Times, the Atlantic, and Snapchat’s news service—the group will cover how to combat “fake news and social media disinformation.”