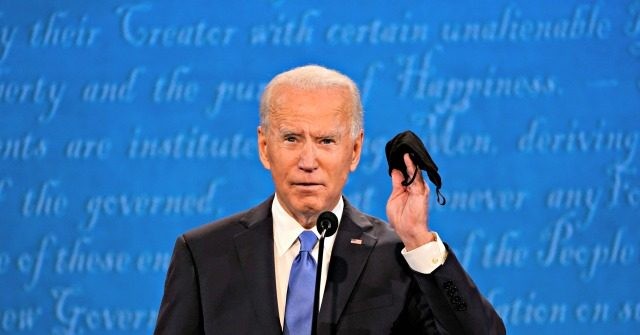 Former Vice President Joe Biden attempted to make a statement on Thursday at the presidential debate in Nashville, Tennessee, as he wore a face mask as he stepped on stage and removed it as he walked to the podium.

Over the past few months, Biden has supported the use of face masks and has attempted to use them to benefit his campaign as a political prop.

In August, Biden said that “every single American should be wearing a mask when they are outside for the next three months at a minimum.”

“Every governor should mandate mandatory mask wearing,” he added.

The next month, in September, Biden denied calling for a national mask mandate. “No, no,” Biden said, denying he ever proposed such a thing, adding that he would “ask every person in authority” to impose one.

“I’m a constitutionalist,” Biden insisted. “You can’t do things the Constitution doesn’t allow you the power to do.”