It's Official: The George Floyd Riots Were the Most Destructive in U.S. History

Protests in 140 cities across America in the wake of the death of George Floyd devolved into violent looting and riots that have destroyed black lives, black livelihoods, and black monuments. At least 26 Americans have died in the riots, most of them black. The first two weeks of these deadly riots were officially the most destructive riots in U.S. history when it comes to insurance claims.

More than 700 buildings were damaged or destroyed in Minneapolis alone. 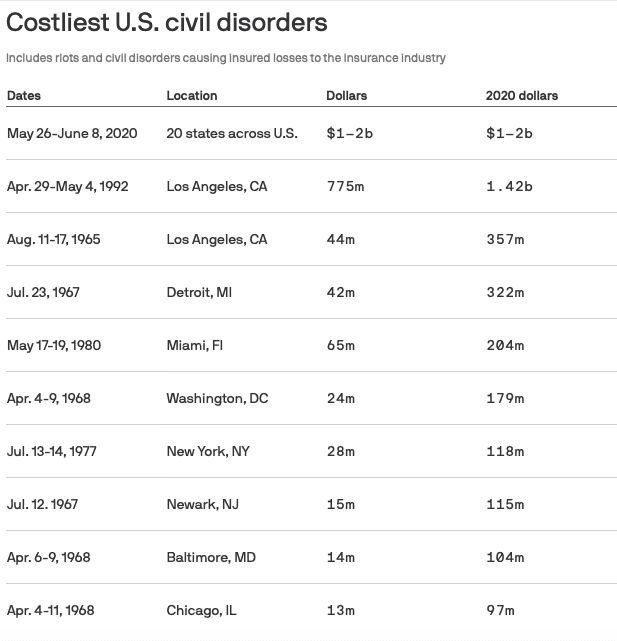 Axios screenshot of George Floyd riots and other riots analyzed according to insurance pay-outs.

Property Claim Services (PCS) tracked insurance claims related to civil disorder since 1950 and classifies anything above $25 million in insured losses a “catastrophe.” PCS reported that the first wave of George Floyd riots will cost the insurance industry far more than any prior one. Even the $2 billion number may be an underestimate. The Insurance Information Institute (Triple-I) compiled the PCS data and estimated the $1 billion to $2 billion number.

The George Floyd riots also proved far more widespread than previous destructive riots in the U.S. “It’s not just happening in one city or state — it’s all over the country,” Triple-I’s Loretta L. Worders told Axios.

Kenosha Rioters Destroyed ‘the Very Neighborhoods That They Want to Protect’

Rioters ostensibly engaged in looting, vandalism, and arson in order to push the message that “Black Lives Matter,” but the destruction has disproportionately victimized black communities.

Violent riots in Kenosha, Wisc., lasted for roughly a week before the National Guard restored order, but in that brief period, rioters damaged or destroyed at least 56 businesses and the mayor estimated a grand total of $50 million in damage. While Kenosha’s population is nearly 80 percent white and only 11.5 percent black, the Uptown neighborhood damaged in the riots is one of the city’s most diverse areas.

“I always think that people have the right to protest—to peacefully protest—but this goes beyond that,” Abel Alejo, owner of the La Estrella Supermarket and an immigrant from Mexico, told the Journal. “They were destroying the neighborhoods that they want to protect.”

Clyde McLemore, the founder of the Lake County chapter of Black Lives Matter, warned that the riots detracted from his organization’s message. He said he urged BLM protesters to obey the city’s curfew and he does not think they perpetrated any of the destruction.

“We’re not into doing anything to damage our community,” McLemore said. “It waters down our message.”

The riots also disproportionately hit the black community in Minneapolis and Chicago.

Many Black Lives Matter and antifa activists dismiss the destruction of the riots, insisting that buildings and goods are “just property.” An activist even wrote a book In Defense of Looting, arguing that looting is a powerful act of protest against a supposedly oppressive capitalistic system.

The riots’ disproportionate effect on minority communities should remind Americans that property rights are the basis of a market economy and a ladder providing opportunities for everyone. As Brad Polumbo wrote over at the Foundation for Economic Education (FEE), “The protection of private property is what ensures immigrants, minorities, and poor people are not derailed on their climb up the economic ladder in pursuit of the American dream.”

“Callous disregard of property rights creates long-term instability that scares away business investment and reduces economic opportunity. Often, this manifests itself in the form of lower property values, higher insurance rates passed on to consumers,reduced tax revenue, and fewer jobs in an area,” Polumbo added. “You don’t have to just take my word for it. Studies examining the long-term economic impact of the 1960s Civil Rights Era riots and the 1990s Los Angeles Rodney King riots document these exact effects.”

These riots nearly reached the scale of a natural disaster like Hurricane Isaias. This damage will leave lasting scars on many communities, many of them majority-minority. It also gives the lie to claims about “peaceful protests.” Left-leaning journalists and politicians cannot sweep this damage under the rug.

Trump: ‘Joe Biden Has Given Moral Aid and Comfort’ to Rioters by Calling Riots ‘Peaceful Protests’