Last summer, the Midwestern storm, known as a derecho, became the most expensive thunderstorm event recorded in U.S. history.

Figures from the National Oceanic and Atmospheric Administration showed the sustained line of thunderstorms traveled from South Dakota to Ohio, costing farmers more than $7 billion.

As Sampson recovers what’s left of his corn, he told Fox News he wants a president who will not give him a handout.

“I want to be inspired by my leadership. I don’t want to be given anything,” he said.  “That’s what I fear with Biden. He’s going to give me lots of stuff and tell me all the wonderful things I want to hear. “

“I feel like I’m in the minority as a farmer voting for Biden,” Jordan told Fox News.

The derecho didn’t impact him, but ongoing trade disputes worry the corn and soybean farmer who said he wants a president he can rely on.

“We need a good strong foreign policy in place so that we can build those relationships to build our export markets and build better commodity prices for us farmers,” said Jordan.

An average of recent polls shows a tight race among likely voters, according to Real Clear Politics. 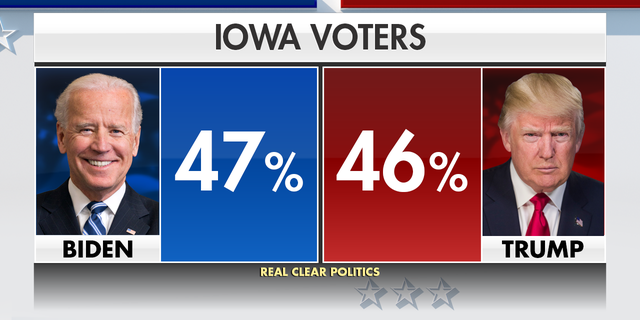 “In Iowa typically, the rural and small-town areas, which of course include the farmers, are central to any kind of electoral victory,” said Dennis Goldford, a politics professor at Drake University.

A representative from Iowa’s Secretary of State’s Office confirmed that more than one-third of registered voters in the state have voted early.