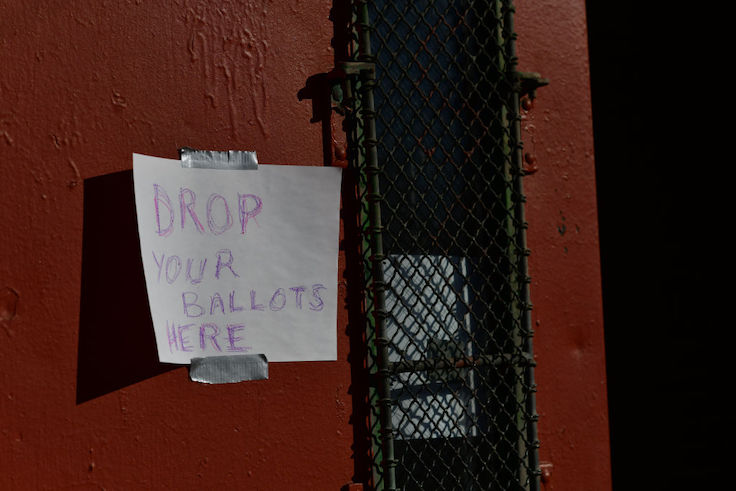 In a major election victory for Democrats, a short-handed and evenly divided Supreme Court refused to disturb a state court order allowing officials in Pennsylvania to count tardy mail-in ballots Monday night, turning down a Republican request to impose an Election Day deadline.

Pennsylvania election supervisors anticipate that up to 3 million people will vote by mail in the hotly-contested battleground state. In a testament to the challenges facing courts and election officials alike, lawyers on both sides of Monday’s dispute warned the justices that public confidence in the election would be compromised unless their side prevailed.

Chief Justice John Roberts voted with the High Court’s liberal wing to deny the GOP request, while Justices Clarence Thomas, Samuel Alito, Neil Gorsuch, and Brett Kavanaugh noted their dissent from the Court’s order. When the justices evenly divide, the decision below is automatically affirmed without explanation. It takes five votes to grant a request of the sort Republicans sought.

The Supreme Court has otherwise been hostile to last-minute voting accommodations crafted by federal judges. In April, the justices blocked an eleventh hour lower court order that extended absentee voting in Wisconsin one week past the state’s Democratic presidential primary. And on Oct. 5, the High Court reinstated a witness signature requirement for South Carolina mail-in ballots after a judge in Columbia lifted the rule. In a separate statement accompanying that decision, Kavanaugh wrote that the courts should not second guess state officials setting pandemic-related balloting procedures or alter the rules as the election nears.

In light of the pandemic, the Supreme Court of Pennsylvania in September told poll workers to tabulate mail-in ballots received by Nov. 6 unless “a preponderance of the evidence” shows they were sent after Election Day. Pennsylvania Republicans challenged that accommodation in the High Court, predicting it would inject disorder and dirty doings into the electoral process.

In court filings, Republican legislators argued the state court’s order is unlawful for two reasons. First, it extends voting past Election Day, which is set at a single day across the country by federal law. Second, the Constitution directs state legislatures, not state courts, to set election procedures.

The Republican petitioners also warned the justices that there are seven other lawsuits underway across the country involving bids to push ballot receipt deadlines past Election Day. They predicted those cases will reach the justices in short order unless their appeal was granted.

“If this Court denies the requested stay, the denial will allow similar decisions extending deadlines from other courts around the country to proliferate,” the Keystone GOP wrote in court filings.

“The Pennsylvania Supreme Court’s ability to be left free and unfettered in interpreting the Pennsylvania Constitution is fundamental to our system of federalism,” lawyers for the state wrote.

The state also cited logistical challenges the United States Postal Service is expected to encounter as it processes millions of mail-in ballots across the country. USPS officials have already warned the state that “its delivery capabilities conflicted with the election calendar,” state lawyers wrote.

“Using postmarks to determine ballot eligibility hinges a voter’s right to vote on random chance,” they added. “And the Pennsylvania Supreme Court refused to disenfranchise voters based on random bad luck.”

State GOP legislators made the stakes of the case plain in their filings.

“In a year where there is a very real possibility that the final presidential election result hinges on Pennsylvania, the new rules imposed by the decision of the Supreme Court of Pennsylvania (a body elected in partisan elections) could destroy the American public’s confidence in the electoral system as a whole,” their application reads. Democratic judges have a five to two advantage on the state court.

The Pennsylvania Supreme Court has also permitted return of ballots at so-called drop boxes and rejected bids allowing poll watchers to be assigned to precincts outside their home counties. Both those decisions were opposed by Republicans.

A similar emergency appeal is also pending before the justices from Wisconsin. In addition to the mail-in ballot deadline, that case involves electronic delivery of votes and residency requirements for county poll workers.