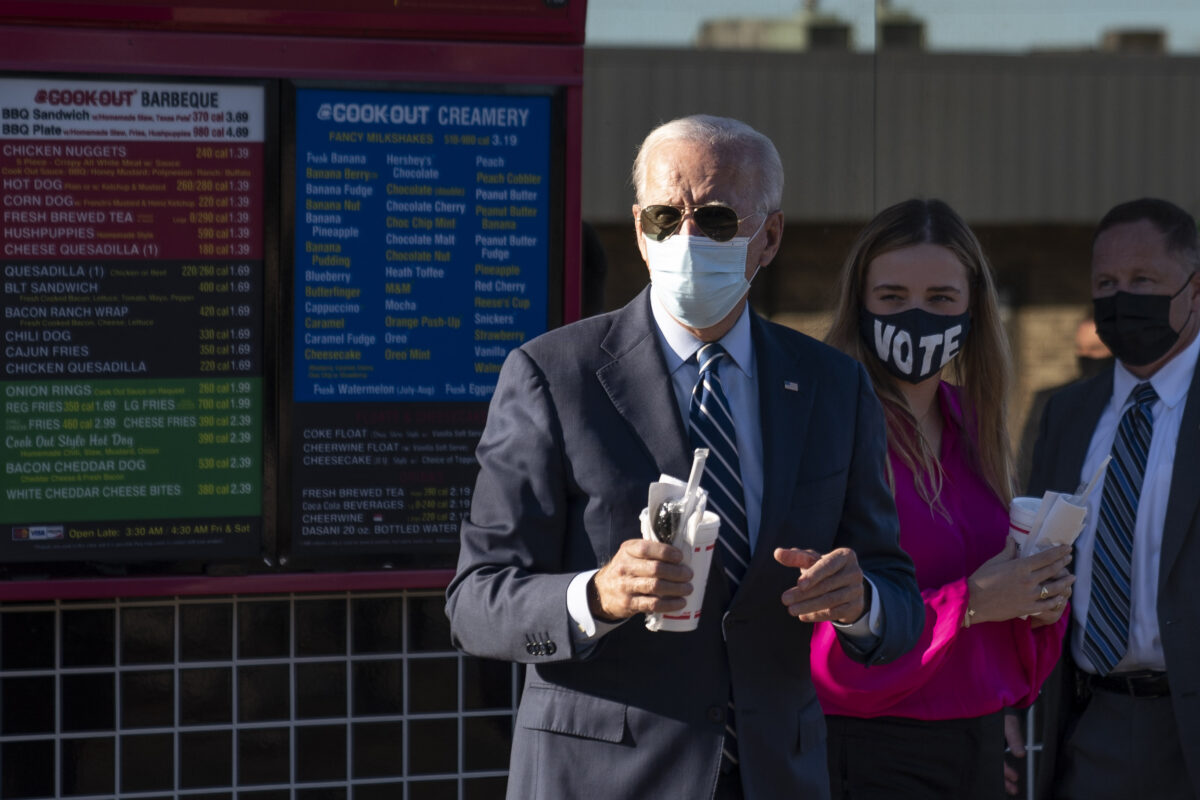 The former business partner of Hunter Biden said on Thursday that he met former Vice President Joe Biden in May 2017 and spent one hour discussing a deal with a Chinese energy conglomerate and the Biden family history.

Tony Bobulinski intends to turn over three smartphones with evidence about the Biden family’s deal to the FBI on Friday and to discuss what he knows with Senate investigators who are probing Joe Biden’s business dealings.

Hunter Biden and his partners brought Bobulinski into a deal in early 2017 with with Chinese energy conglomerate CEFC China Energy Company Limited, Bobulinski said during a press conference on Thursday.

Hunter Biden and his associates brought him into the deal to serve as the CEO of SinoHawk LLC, a business entity created to formalize the Biden-CEFC investment partnership, Bobulinski said. The company name was derived from “Sino,” which stood for China, and “Hawk” which was the favorite animal of Hunter Biden’s late brother, Beau Biden. SinoHawk was supposed to have been initially funded with $10 million, which would subsequently grow to billions in investment funds, Bobulinski added.

The Epoch Times obtained a proposal for the chairman of CEFC, dated April 10, 2017, which lists Hunter Biden and Bobulinski as prospects for the management and board of the company and James B. Biden Sr., the brother of former Vice President Joe Biden, as an advisor. The arrangement in the proposal mirrors the content of an email published by The New York Post last week that detailed a proposed equity breakdown between the U.S. participants in the deal.

“I was told this past Sunday by somebody who was also involved in this matter that if I went public with this information, ‘It would bury all of us, man. The Bidens included,’” Bobulinski said.

Hunter Biden and James Biden personally introduced Bobulinski to Joe Biden on May 2, 2017, the day before the former vice president spoke at the The Milken Institute’s Global Conference, according to Bobulinski. The three discussed the Biden family history and plans for the partnership with the Chinese company.

Bobulinski was told not to use Joe Biden’s name in writing and that both Joe Biden and Hunter Biden were “paranoid” that the former vice president’s involvement should remain a secret.

According to records with the Delaware Secretary of State, SinoHawk was formed on May 15, 2017, two days after the email in question.

Bobulinski said that shortly after, he began to disagree with Hunter Biden about how the funds that the newly formed firm receives should be used. Hunter Biden insisted on taking out $5 million from the first $10 million for the Biden family. Bobulinski objected and insisted that “proper corporate governance procedures be implemented” but Hunter Biden responded that the Chinese were “really investing in the Biden family.” On May 17, 2017, Hunter Biden told Bobulinski that CEFC “wanted to be my partner … to be partnered with the Bidens.”

Bobulinski said that the $10 million that was to be transferred to SinoHawk never made it to the company.

“Instead, I found out from Senator Johnson’s September report that the $5 million was sent in August 2017 to entities affiliated with Hunter,” Bobulinski said.

In a statement emailed to The Epoch Times, Bobulinski said he doesn’t have a “political axe to grind” and that the few political donations he made went to Democrats. A search of the Federal Election Commission database corroborates this.

Shanghai-based conglomerate CEFC China Energy was China’s largest privately-held oil company before it was caught in Beijing’s crosshairs in 2018. The oil conglomerate made billions of dollars in Russia, eastern Europe, and parts of Africa, while its now-disgraced founder and chairman Ye Jianming fostered ties with high-level Chinese Communist Party (CCP) officials.

Ye has been missing since early 2018 after he was placed under investigation by the Chinese regime for “suspected economic crimes” and detained. A state-owned enterprise took control of CEFC in March 2019, and the firm declared bankruptcy early this year, according to Chinese media Caixin.

Bobulinski has already handed over a trove of his files to Sen. Ron Johnson (R-Wisc.), the chairman of the Senate Homeland Security Committee.