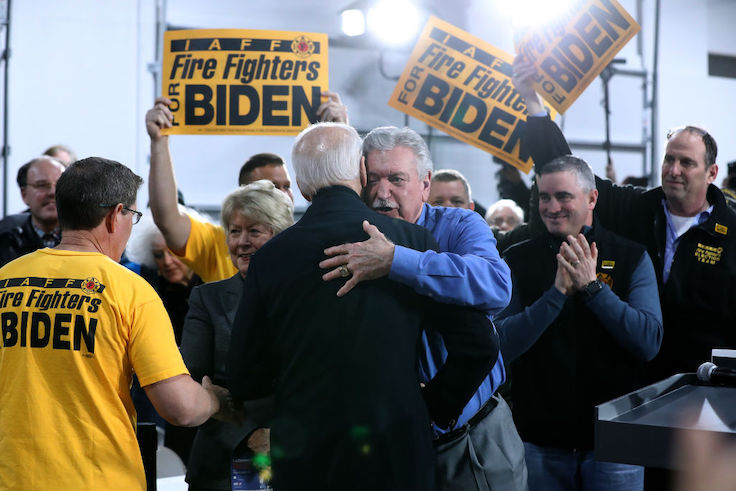 Firefighters are feeling betrayed after the FBI opened a criminal investigation into their union president, a staunch Joe Biden ally who allegedly siphoned more than $1 million from the union pension fund in violation of the law.

The FBI—along with the U.S. Attorney’s Office in Washington and the Department of Labor—is investigating Harold Schaitberger, the president of the International Association of Fire Fighters, a group that represents more than 300,000 firefighters. In March, an internal union probe concluded that Schaitberger and IAFF former treasurer Thomas Miller illegally collected pension payouts while still being employed by the union over the course of two decades. Miller is also under federal investigation.

The federal investigation has sent shockwaves down the rank-and-file members of the union, some of whom worry that the scandal will permanently erode trust in the labor organization. Other union members saw the incident as evidence of the growing disconnect between the local union chapters and headquarters, leading them to wonder whether it is worth paying union dues at all unless the union undertakes major reforms.

“I think it has a major impact on trust,” Daniel Coughlin, a firefighter in New Haven, Connecticut, said. “I’m going to be honest with you—I think the only way that trust can be regained is through regime change. New leadership.”

Schaitberger is one of Joe Biden’s closest and oldest labor allies. The union endorsed Biden the day that he launched his presidential campaign in 2019. Biden has returned the favor, directing supporters to donate money to the IAFF in late March, just days after the union’s treasurer released his report on Schaitberger’s financial mismanagement and alleged corruption. The IAFF confirmed that authorities requested internal documents related to the union pension fund but denied any wrongdoing. The Biden campaign did not respond to a request for comment.

Schaitberger is not the only Biden labor ally who has been embroiled in a scandal. In July, union members filed a lawsuit accusing senior leaders of the American Federation of Government Employees—the largest public-sector union in the country that has endorsed Biden—of covering up sexual abuse and misconduct by its disgraced former president Jeffrey David Cox. The former United Auto Workers president Gary Jones, another Biden ally, also pleaded guilty in July to spending more than a $1 million in union funds for his own gains.

Justin McCarthy, a board member of a local IAFF chapter, said that firefighters in his region are adopting a wait-and-see approach to the scandal, awaiting the conclusion of the federal investigation. He said that if the allegations are proven true, it could permanently damage the union’s reputation among its members.

“If the allegations that have been made … are proven true, I think that the union will have a very uphill battle to try to regain the trust of their members,” McCarthy said.

The union’s overt alignment with Joe Biden is another sign of the growing disconnect between card-holding members and the international headquarters. IAFF has donated $5,000 to the Biden campaign and spent nearly $75,000 to support his candidacy in 2019, according to Department of Labor records. Despite this massive spending, many union members do not agree with the endorsement, prompting 18,000 of them to file a petition to retract the endorsement. Coughlin said that many members felt the nomination was forced onto the union, with minimal input from the rank-and-file.

“I will tell you that a lot of firefighters have a problem with the fact that the IAFF just jammed a nominee down our throat without ever hearing from the membership,” he said.

The internal probe also found a litany of other abuses of power by Schaitberger and his underlings. Union officials diverted millions of dollars in funds to their pet project, disappearing roughly $6 million from the union coffers, according to the report. The union’s sloppy management of the pension fund also violated both IRS guidelines and federal law, according to three separate legal opinions included in the probe. “The record keeping performed prior to my assuming office in September 2016 was so poor, one could argue it was designed that way,” Edward Kelly, the current treasurer of the union, wrote in the report.

Frank Ricci, former president of the New Haven chapter of the IAFF and a senior strategist at the Yankee Institute, said that the federal probe is a necessary addition to the internal probe. The firefighter behind a landmark Supreme Court ruling has been a vocal critic of Schaitberger, even as he held a senior role in the union. Ricci said change is long overdue.

“I believe there is more corruption and collusion at the expense to firefighters to be uncovered,” he said. “These union bureaucrats aren’t running in burning buildings, they are running into restaurants and for car service.”

McCarthy said that he was “caught off guard” by the corruption allegations, but said he was not shocked by it. He said he always knew a large organization like the IAFF could succumb to corruption, but hoped his organization would be better than that.

“I always believed the fire service to be above this,” he said.

Neither the FBI nor the Department of Justice returned requests for comment.