Sen. Dianne Feinstein (D-Calif.) announced late Monday that she will not be seeking a leadership position in the Senate Judiciary Committee, after which Sen. Dick Durbin (D-Ill.) signaled that he will seek the position.

The 87-year-old congresswoman announced, “After serving as the lead Democrat on the Judiciary Committee for four years, I will not seek the chairmanship or ranking member position in the next Congress.”

Feinstein announced that she is looking forward to serve as a senior Democrat these committees, where she hopes to work on issues surrounding “gun safety, immigration reform, and addressing inequities in criminal justice.”

She also listed COVID-19, combating climate change, and protecting access to healthcare as other priorities where she would devote her attention. Feinstein added that she would focus on California’s wildfires and droughts, which she called “existential threats” for her home state.

In late October, Feinstein faced backlash from Democrats when she praise Republicans for their organization of the hearings with Judge Amy Coney Barrett, the then-Supreme Court nominee.

The hearings ended on Oct. 15, upon which Feinstein hugged Sen. Lindsey Graham (R-S.C.), the chair of the Judiciary Committee, and praised him for “one of the best set of hearings that I have participated in.”

“I want to thank you for your fairness and the opportunity of going back and forth. It leaves one with a lot of hopes, a lot of questions and even some ideas—perhaps some good bipartisan legislation we can put together to make this great country even better,” she told Graham on Oct. 15. 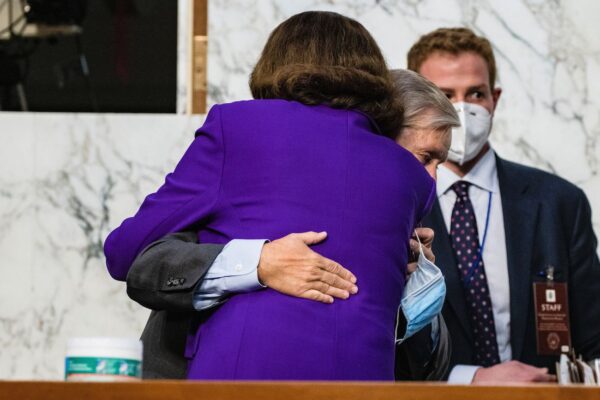 Sen. Dick Durbin (D-Ill.), the Senate minority whip since 2015, said in a statement late Monday that he is seeking the top Democrat position on the Senate Judiciary Committee in response to Feinstein’s decision.

“I want to thank Senator Feinstein for her distinguished leadership on the Judiciary Committee during turbulent years. She has been a champion for common-sense gun safety, reproductive rights, and many other issues of critical importance to the American people. I am proud to call her my friend and colleague, and I look forward to continuing to serve with her on the Committee in the years to come.”

“I intend to seek the top Democratic position on the Judiciary Committee in the 117th Congress. We have to roll up our sleeves and get to work on undoing the damage of the last four years and protecting fundamental civil and human rights,” he wrote, adding that he has served on the Senate Judiciary Committee for 22 years.

Durbin’s office has said there is nothing in Democratic caucus rules that blocks him form serving in his leadership post and also as the top Democrat on the judiciary committee.

In a statement, Senate minority leader Chuck Schumer (D-N.Y.) said he was “grateful for Senator Feinstein’s leadership and contributions to our caucus and country” in the post.

Sen. Chuck Grassley (R-Iowa) is expected to reclaim the top Republican spot on the Senate Judiciary Committee next session after leaving for two years to head the Senate Finance Committee.

Tom Ozimek and The Associated Press contributed to this report.