A federal judge in Pennsylvania on Saturday dismissed a lawsuit filed by President Donald Trump’s campaign that alleged constitutional violations stemming from the state’s implementation of a mail-in voting plan for the November election.

The Trump campaign lawsuit argued that without security measures like guards by drop boxes, signature comparison of mail-in ballots, and poll watchers, there is a significant risk of voter fraud.

U.S. District Judge J. Nicholas Ranjan, a Trump appointee, dismissed the suit, arguing that the Trump campaign offered no hard evidence voter fraud would be likely. He argued that while the campaign did not need to prove actual voter fraud, the burden of proof to be met in the case is that voter fraud must be “certainly impending.”

In his 138-page ruling, Ranjan wrote: “The problem with this theory of harm is that it is speculative, and thus Plaintiffs’ injury is not “concrete”—a critical element to have standing in federal court. While Plaintiffs may not need to prove actual voter fraud, they must at least prove that such fraud is ‘certainly impending.’ They haven’t met that burden.”

Ranjan noted that the campaign provided a series of “speculative” assumptions.

While acknowledging that “all of these assumptions could end up being true, and these events could theoretically happen,” the judge said the evidence presented in the case does not support the claim that they are “certainly impending,” which he said is the legal standard that the Plaintiffs must meet. 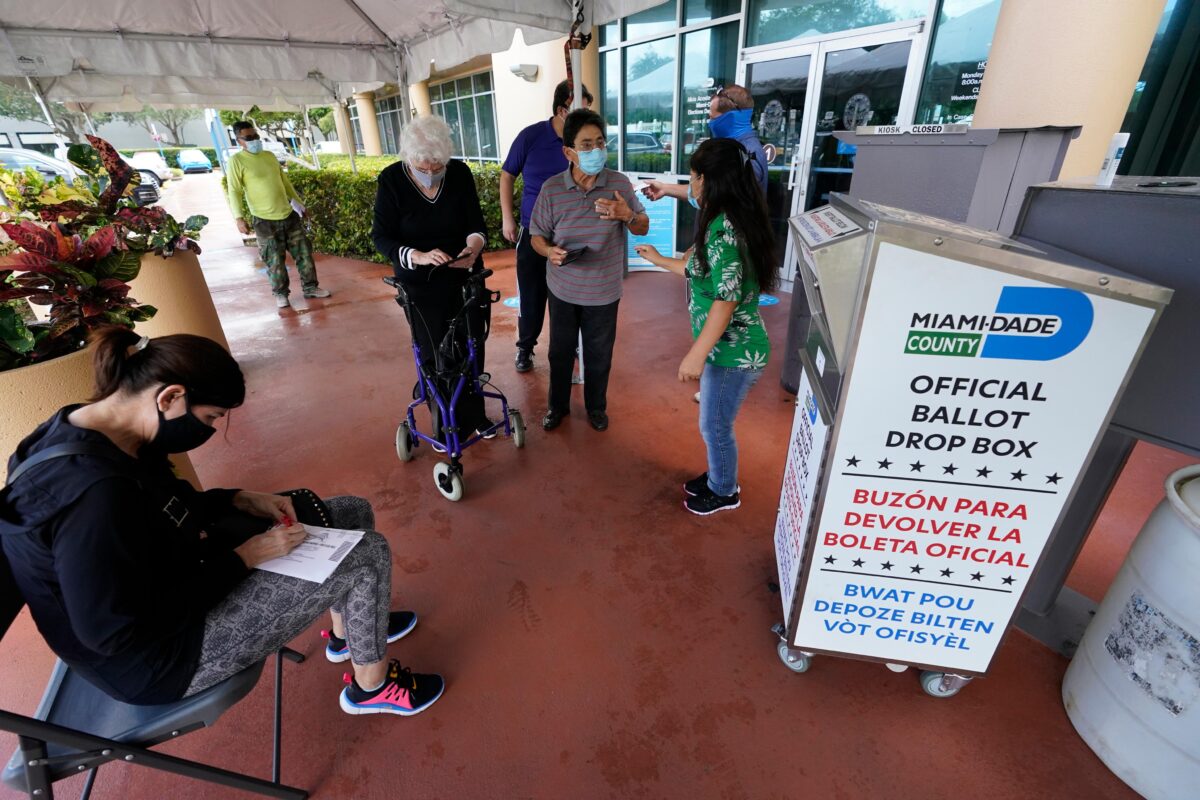 Voters prepare to turn in their mail-in ballots, at the Miami-Dade County Elections Department in Doral, Fla., on Oct. 6, 2020. (Wilfredo Lee/AP Photo)

Trump’s campaign said it would appeal at least one element of the decision, with barely three weeks to go until Election Day in a state hotly contested by Trump and Democratic presidential nominee Joe Biden.

“President Trump is winning the fight for a free, fair election in Pennsylvania,” Matthew Morgan, the Trump campaign’s general counsel, told The Hill.

“We’ve continued the fight against the Democrats’ completely unmonitored, unsecure drop boxes in the federal courts. Clearly, we disagree with the Western District’s decision on unsecure drop boxes, and President Trump’s team will immediately file an appeal.”

The campaign said in a statement that it looked forward to a quick decision from the appeals court “that will further protect Pennsylvania voters from the Democrats’ radical voting system.”

The lawsuit is one of many partisan battles being fought in the state Legislature and the courts, primarily over mail-in voting in Pennsylvania, amid concerns that a presidential election result will hang in limbo for days on a drawn-out vote count in Pennsylvania.

In this case, Trump’s campaign wanted the court to bar counties from using drop boxes or mobile sites to collect mail-in ballots that are not “staffed, secured, and employed consistently within and across all 67 of Pennsylvania’s counties.”

More than 20 counties—including Philadelphia and most other heavily populated Democratic-leaning counties—have told the state elections office that they plan to use drop boxes or satellite election offices to help collect the massive number of mail-in ballots they expect to receive.

Trump’s campaign also wanted the court to free county election officials to disqualify mail-in ballots where the voter’s signature may not match their signature on file and to remove a county residency requirement in state law for certified poll watchers.

“We told the Trump campaign and the president, ‘put up or shut up’ to his claims of voter fraud in Pennsylvania,” Shapiro told The Associated Press. “It’s important to note they didn’t even need to prove actual voter fraud, just that it was likely or impending, and they couldn’t even do that.”

The Associated Press contributed to this report.