President Trump is polling close behind Democratic nominee Joe Biden in Florida, according to one poll, as national polls continue to show Biden leading.

Both candidates plan to campaign in the Sunshine State on Thursday.

BIDEN AND TRUMP TO TANGLE IN TAMPA ON THURSDAY

An NBC News/Marist poll released Thursday found Biden with 51% of likely voters’ support and Trump with 47% in Florida. The poll’s margin of error, 4.4 points, is slightly greater than the difference between the candidates.

Biden and Trump will hold dueling rallies Thursday in Tampa, Fla., the western anchor of the critical I-4 swing region in the extremely crucial battleground state. Former President Obama stumped for Biden in Florida earlier this week.

THE PRESIDENTIAL ELECTION COMES DOWN TO THESE 9 STATES

Biden has also maintained an edge over Trump in national polls. A CNN poll conducted by SSRS from Oct. 23-26 found that 54% of likely voters back Biden compared to 42% who back Trump. Biden has far more support among women, with 61% support compared to Trump’s 37%, according to the CNN poll. 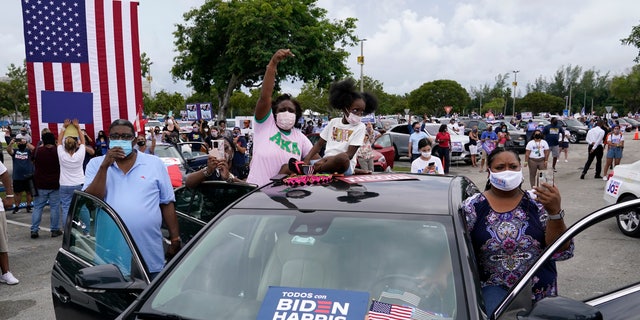 In addition to Florida, Biden continues to poll well in battleground state Michigan. A New York Times/Siena College poll released Wednesday found Biden at 49% support among likely voters and Trump at 41%. Biden is up by 8.6 points in Michigan according to RealClear Politics’ polling average.

Cook Political Report’s Dave Wasserman said Tuesday it’s time to “sound the alarm” that Biden is likely to be the next president of the U.S.

Wasserman made the case that Biden has a better chance of beating Trump in 2020 than Hillary Clinton did in 2016 for multiple reasons.

“First, Biden’s lead is larger and much more stable than Clinton’s was at this point. Second, there are far fewer undecided and third-party voters left to woo — reducing the chances of a late break toward one side,” Wasserman wrote for NBC News.