Dems Push Pelosi to Back Off Hard Line on Relief Bill 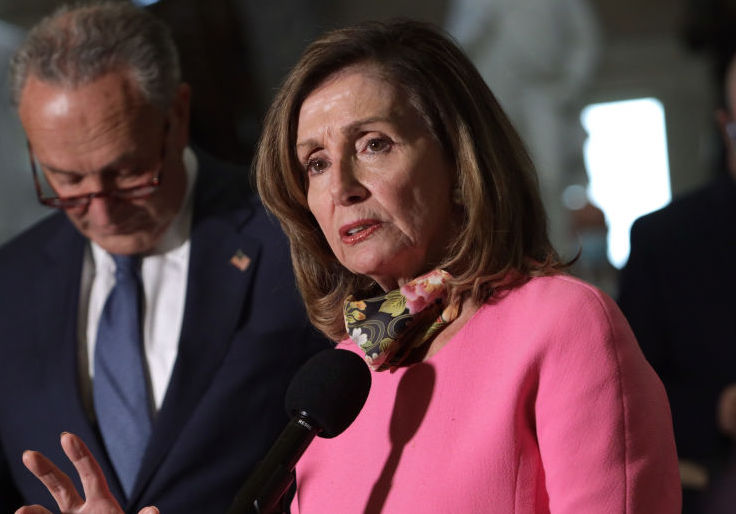 Moderate Democrats lashed out at Speaker of the House Nancy Pelosi (D., Calif.) during a conference call Tuesday for her refusal to negotiate with the White House on coronavirus relief.

Representatives Abigail Spanberger (Va.), Max Rose (N.Y.), Jason Crow (Colo.), and Kathleen Rice (N.Y.) all called on Pelosi to accept a compromise to get the relief package through, according to Politico, and Spanberger said Democrats need to do their “g—damn job.” But Pelosi stuck by the $3.4 trillion HEROES Act that the House passed in May.

Spanberger asked why members were no longer expected to stay in session until a deal is reached, which Pelosi dismissed before signing off of the call.

“My conviction is to actually do my g—damn job and come up with a solution for the American people,” Spanberger said. “We have to bring something to the floor.”

“Every member of the leadership team, Democrats and Republicans, have messed up,” Rose said in Politico‘s account of the call. “Everyone is accountable. Get something done.”

Pelosi said she wants a bill that would gain bipartisan support and President Donald Trump’s signature, but she rejected requests from some moderates to bring a new, smaller stimulus bill to the House floor for a vote. This statement comes after Senate Democrats blocked a Republican “skinny” relief bill last week that would have extended unemployment benefits, provided more funding for schools and child care, and given legal protections to businesses.

Other Democrats expressed concern that failing to vote on another coronavirus package could mean voters forgetting the House passed the HEROES Act back in May. Still, Pelosi had refused to consider targeted stimulus efforts or a smaller stimulus deal prior to her comments Wednesday morning. She has indicated openness to a $2.2 trillion package but would not go lower to the White House’s number of $1.5 trillion.