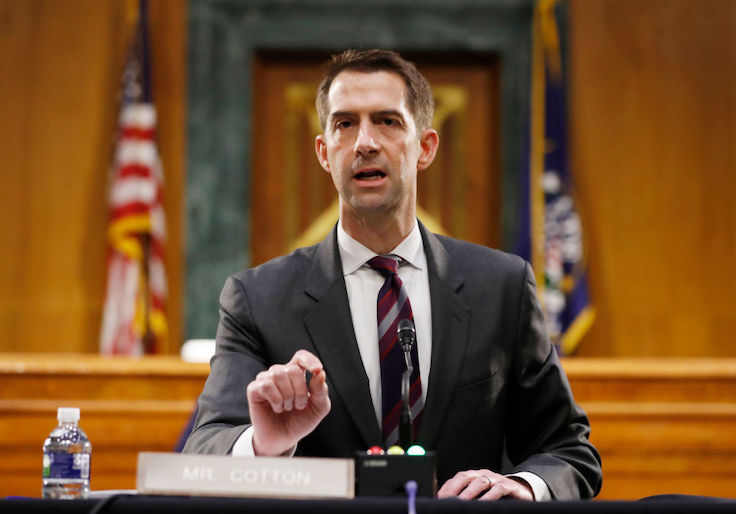 Arkansas senator Tom Cotton (R.) is calling on the Department of Justice to investigate racially segregated events on college campuses in a letter first obtained by the Washington Free Beacon

Cotton is urging Attorney General William Barr to investigate the University of Michigan-Dearborn, the University of Kentucky, and other universities for allegedly violating Title VI of the Civil Rights Act, which prohibits racial discrimination at federally funded institutions. “I write to bring your attention to an alarming trend of apparent racial segregation in schools,” Cotton said. “I urge the [DOJ] to investigate these and similar cases as part of our nation’s commitment to equality before the law.”

Colleges across the nation have sponsored and even mandated racially segregated events. In September, the University of Michigan-Dearborn’s Center for Social Justice and Inclusion held two optional diversity seminars, one for white students and another for students of color, for which the school later apologized. Similarly, the University of Kentucky held two separate training sessions for residential assistants—”one for RAs who identify as Black, Indigenous, Person of Color [sic] and one for RAs who identify as White.”

Cotton cited a report by the National Association of Scholars, which found numerous instances of college campuses segregating residence halls, commencement ceremonies, cultural centers, alumni groups, and classes on the basis of race. “College administrators often rationalize these forms of racial segregation, claiming they give members of certain racial groups, especially minority groups, spaces where they can discuss shared concerns and issues,” Cotton said. “Thus, these defenders attempt to portray racial segregation as a tool to further diversity.”

The letter to the DOJ was also shared with the Department of Education, which recently launched an investigation into Princeton University after the school declared it suffers from “embedded” structural racism.