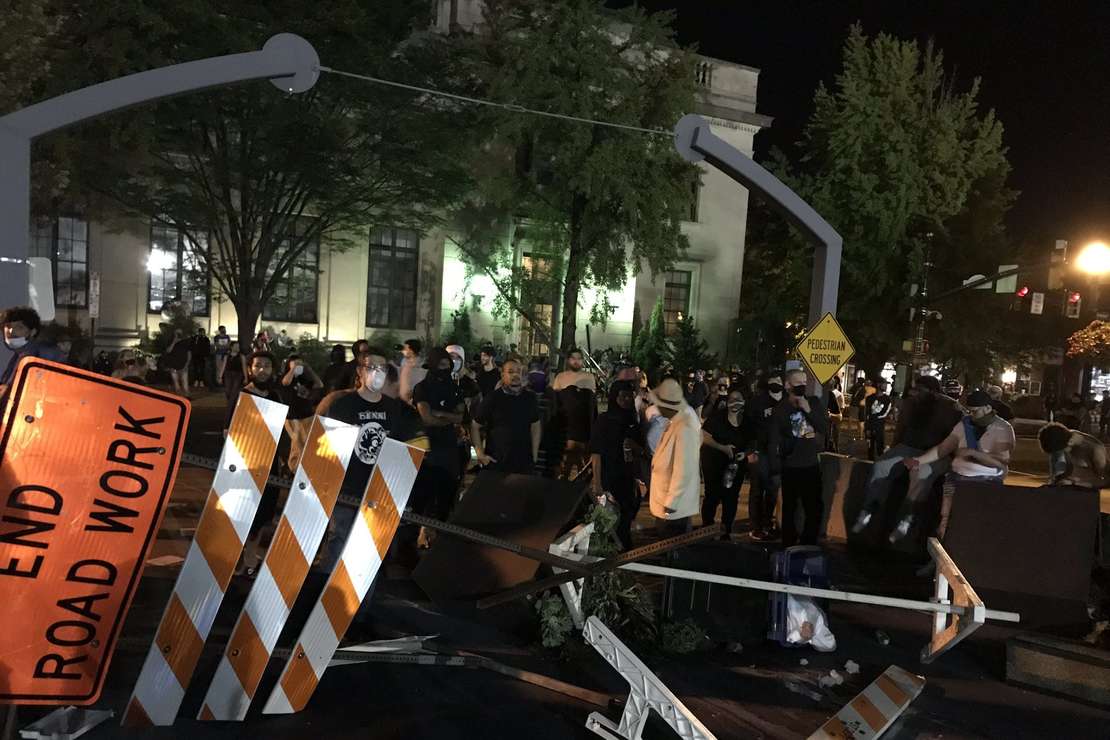 Black Lives Matter riots came to Lancaster, Pa., on Sunday night after a police officer shot a Latino man who was charging him with a knife, according to police. Rioters looted local businesses, built a barricade, set up a massive bonfire, smashed windows at the police station and post office, and spray-painted “Death to cops!” on a nearby wall.

The shooting of Ricardo Munoz

On Sunday afternoon at about 4:15 p.m., a Lancaster police officer responded to a domestic disturbance call, the Lancaster County District Attorney’s Office explained in a statement. “On scene, a Lancaster city police officer fired at a 27-year-old man who was armed with a knife. The man, identified as Ricardo Munoz, was killed and pronounced dead at the scene.”

Lancaster County detectives have begun investigating the use of force. The DA’s office did release information “based on a preliminary investigation, which included review of footage from the firing officer’s body camera.”

“The footage shows that when the officer gets in front of a residence in the 300 block of Laurel Street, Munoz immediately emerges from inside and runs toward the officer, brandishing a knife above his head, in clear view, in a threatening manner. The officer then fired. No one else was struck by gunfire,” the DA’s office reported. The officer involved has been placed on leave.

Bodycam footage clearly shows Munoz running after the officer, holding a knife in his hand, after leaving the house following an angry confrontation with a woman.

This is the bodycam footage of the officer-involved shooting in Lancaster, PA that Black Lives Matter is rioting over. The perpetrator charged at the police officer with a knife over his head with clear intent to strike. pic.twitter.com/xD72TweQK4

While the public does not know all the facts, this video rather conclusively shows that the officer fired in self-defense. At close range, a knife can be more deadly than a gun, and self-defense instructors insist that if someone with a knife charges you at a distance of ten feet or less, you should open fire.

Even so, agitators seized on this incident, using Black Lives Matter rhetoric to justify violence.

Shortly after the shooting, rioters broke into stores and started looting. Blaze TV’s Elijah Schaffer captured footage of the aftermath of looting. “[L]ooting has started in Lancaster at Villa athletic store approximately 1 hour 50 minutes ago according to the shop owner,” Schaffer tweeted. “Groups of rioters are roaming the city breaking windows and stealing merchandise It was too dangerous to follow them since there are no police.”

BREAKING: looting has started in Lancaster at Villa athletic store approximately 1 hour 50 minutes ago according to the shop owner

It was too dangerous to follow them since there are no police pic.twitter.com/FQIH57hccy

Protesters out in the intersection of West Chestnut Street and North Prince in Lancaster city in response to police involved shooting that occurred Sunday afternoon. @LancasterOnline pic.twitter.com/sstzzefznf

Rioters removed street signs from the streets and assembled a barricade to fight the police.

BREAKING: Antifa has begun breaking the windows of the Lancaster police precinct

Officers are responding with non lethal rounds and are now in the streets pic.twitter.com/icg1rDxxC9

Black Lives Matter agitators broke the windows of the police station and the post office.

Rioters also spray-painted “Death to cops” on a nearby building.

After the riot, agitators created a bonfire in the middle of the street.

BLM and black bloc rioters in Lancaster, Pa. start a street fire after spending hours attacking cops and the police station with projectiles. They rioted because a cop killed a Latino man who charged at him with a knife. Video by @livesmattershow: pic.twitter.com/4V3AjrMSWp

The narrative doesn’t care about your facts

At some point during the protest or the riot afterward, an activist claimed that minorities built Lancaster. “If you’re a minority, your ancestor built this f****n’ city,” the agitator claimed, explicitly saying that no “white” people built Lancaster. Fact check: False. German, Irish, and English Americans built Lancaster.

This utterly false statement captures a good deal of the story of the Lancaster riots, however. Agitators did not care that the police officer opened fire in self-defense, in a dangerous situation. This riot followed one day after an unidentified man shot two police officers who were just sitting in their car. Black Lives Matter agitators followed the cops to the hospital, shouting that they hoped the wounded police officers would die. According to police, the rioters physically blocked the entrance to the hospital emergency room.

Despite all this, many media outlets chose to focus on the fact that police arrested a journalist who was covering the agitators’ “protest” outside the hospital.

Yet according to some versions of Marxist critical theory, American society is inherently racist and oppressive and black people are oppressed. In order for justice to be achieved, the “oppressed” must rise up and overthrow the “oppressor,” the complexities of the situation be damned. Antifa activists also apparently spread a false report that a black man had been shot. False reports of police shootings of black men inspired riots in Chicago and Minneapolis last month. Some people even try to brainwash themselves to support this narrative.

The riots have arguably oppressed black people far more than the U.S. supposedly does. The riots have destroyed black lives, black livelihoods, and black monuments. At least 26 Americans have died in the riots, most of them black.

Trump: ‘Joe Biden Has Given Moral Aid and Comfort’ to Rioters by Calling Riots ‘Peaceful Protests’

Portland Antifa Rioters to Police: ‘You Murdered Michael Reinoehl… the Best Ally Ever’

Trump Takes Aim at Marxist Propaganda Behind the BLM Riots

Amid Riots, Washington and Lee University Offers a Class on ‘How to Overthrow the State’