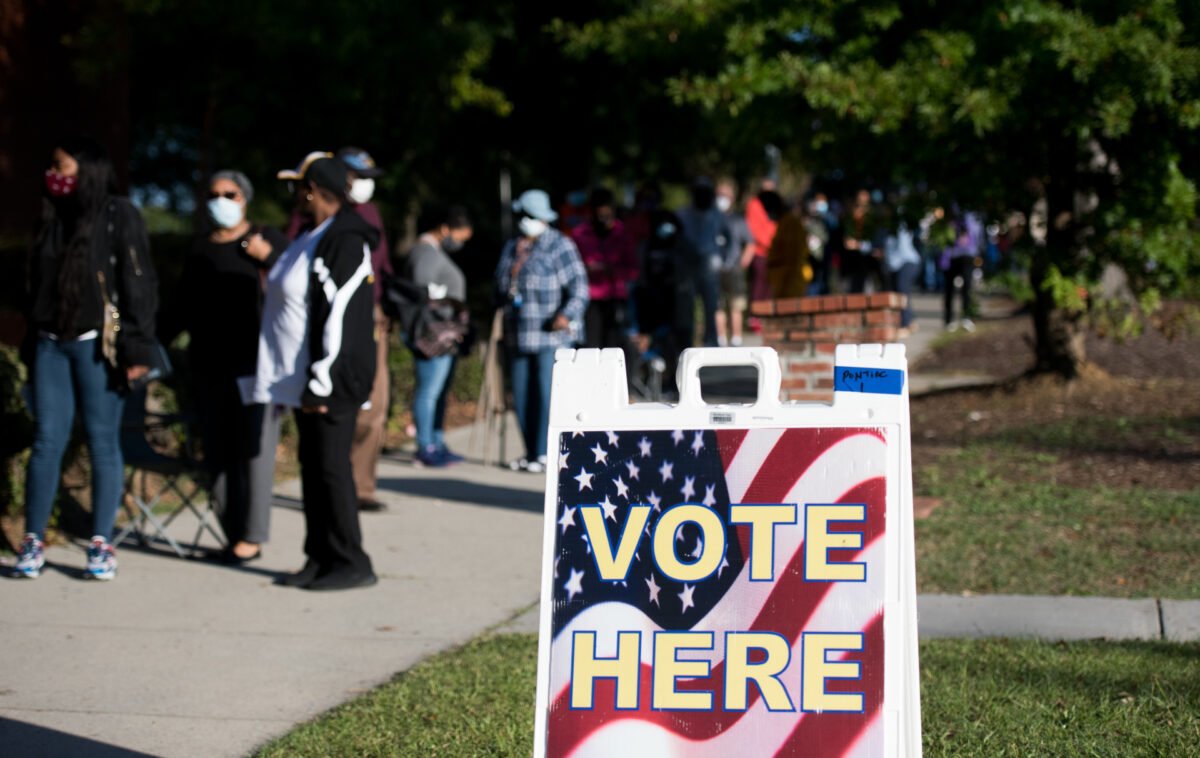 President Donald Trump, former Vice-President Joe Biden, dozens of U.S. Senate candidates and hundreds of congressmen and their challengers are expected to spend in total nearly $11 billion, the most ever, appealing for votes in next Tuesday’s election.

That the current campaign will set a new spending record is no surprise, as such outlays have been steadily increasing for decades. But good luck predicting anything else about the 2020 campaign!

“Anyone who claims even at this late date to know with any degree of certainty who will win in November is delusional,” veteran conservative Republican strategist David Keene told The Epoch Times on Oct. 26.

“The country remains evenly divided and the partisan divisions so deep that historic measures of the impact of the economy and other issues don’t mean as much as they once did,” said Keene.

Keene was a key campaign adviser to former Republican presidents Ronald Reagan and George H.W. Bush, as well as presidential aspirants Robert Dole and Mitt Romney. He was also chairman of the American Conservative Union (ACU) from 1984 to 2011 and president of the NRA from 2011 to 2013.

“Add to this the growing difficulty of anyone regardless of their track record producing poll numbers that can be relied on and the difficulty of calculating just how issues like the pandemic itself and how it has been handled are playing among voters and you have a political fog that is almost impossible to penetrate,” he added.

The CCP Virus Pandemic and national lockdown that began in March and continues to the present day in varying degrees across the country has no precedent.

Whereas the nation’s previous widespread epidemic, the Spanish Flu of 1918, had minimal effect on the congressional elections that year, the CCP Virus—also known as the novel coronavirus—is in many respects the defining mystery issue of the 2020 campaign.

“They created two completely opposite campaign strategies, one of which we have never seen. Trump and Republicans are employing a more traditional campaign, consisting of large rallies and door knocking,” the Washington, D.C.-based Chavous told The Epoch Times.

“Biden and Democrats are doing the opposite; strictly adhering to social distancing guidelines and opting for much smaller gatherings and foregoing door knocking altogether. This is unprecedented, and we do not know if the Biden strategy will succeed,” he said.

The contrasting campaigns are evident “on the ground,” according to Americans for Tax Reform (ATR) President Grover Norquist. “Trump and GOP folks have told me all summer that they were walking the districts and never saw Biden people doing the same,” he said.

Keene, Norquist, and Chavous were among a bipartisan selection of presidential and congressional campaign strategists and advocates interviewed by The Epoch Times, who pointed to additional questions that they contend make confidently predicting 2020 winners all but impossible, including:

Most pollsters missed Trump’s strength and declared former Secretary of State Hillary Clinton a certain winner right up to election day in 2016.

Trump’s surprise victory was largely due to winning battleground states Republican presidential contenders hadn’t won in decades, including Pennsylvania and Wisconsin where an over-confident Clinton failed to campaign actively.

Most polls today have Biden leading Trump, but the Trafalgar Group, which predicted Trump’s 2016 upset, has the President leading his Democratic rival. Rasmussen Reports also has Trump leading.

Robin Biro, a regional director for the 2008 Obama-Biden campaign who specializes in data analysis, told The Epoch Times the Trump ghost, or “shy voter” —individuals who back Trump but are reluctant to say  so to pollsters—effect is real, but it’s not just among Trumpsters.

“We already know that Trump voters are less likely to give their answers to pollsters, but 11.5 percent of independents also fell into the category of shy voters in 2016,” Biro said.

Biro thinks “the basic statistical polling error from 2016 has been corrected by pollsters who now weight by education, but polling errors vary by state and it is entirely possible that we’ll see a different kind of statistical error this year, in either direction.”

A related factor is seen, Norquist suggested, in former Clinton pollster “Mark Penn asking a question a month ago with the Harvard/Harris poll …… how are your neighbors voting. In a poll that had Biden up eight points, 40 percent said their neighbors were voting for Trump and 30 percent said Biden. That might be a measure of ‘shy’ Trump voters. And it is a non-zero number.”

But not everybody agrees on the “shy” voters. Ferox Strategies Chief of Staff Lucia Alonzo told The Epoch Times, “Trump supporters I know are very vocal on their choice, and have the ball cap, t-shirt, and bumper sticker to match.

“Indeed, President Trump has a fervent base, but that base has not grown. Trump can’t turn down the volume and rhetoric long enough to appeal to new and moderate voters he needs, so he goes back to his most loyal followers for fund-raising, rally attendance and votes.”

Spencer Critchley, who also worked for the Obama-Biden campaigns and is the author of “Patriots of Two Nations: Why Trump was Inevitable and What Happens Next,” is not convinced the 2016 pollsters got it wrong.

“Just because something is unlikely doesn’t mean it can’t happen. For example, if a [predictive]model says an event has only a 5-percent chance of happening and it does happen, that doesn’t mean the model was ‘wrong.’ Even extremely unlikely, ‘black swan’ events can and do occur,” he said.

Heritage Action for America Executive Director Jessica Anderson insists, “We’re seeing trends similar to past elections, like Democrats taking advantage of early voting while Republicans are largely waiting until Election Day. Unlike 2016, both campaigns realize they cannot take the Midwest for granted, so they have increased events and outreach there.

“Swing Voters are also up for grabs and have spurred groups like Heritage Action to build out a long-term infrastructure in North Carolina, Pennsylvania, and Wisconsin,” she said.

The actual impact of mail-in ballots and new voter registrations will be somewhat measurable after the election, but for now these two factors are extremely worrisome to strategists.

“What concerns me is that we are kind of in uncharted waters here, given the record-setting amount of early voting that is going on. I look at the long lines of voters waiting for hours to vote early and I wonder who exactly are they? Are they Trump voters coming out now, or are they going to wait till election day?”

Concerns about voter fraud continue, as seen in a recent Public Interest Law Firm (PILF) investigation that found Pennsylvania voters registered at addresses for vacant lots, commercial businesses, and even the Alcoa world headquarters. Critics of mail-in ballots insist they are an invitation to deep corruption of the election process.

Where Black voters come down next week may be the biggest surprise of 2020, as recent polling by Rasmussen Reports suggests Trump has significantly expanded his support among African-Americans.

Republican strategist Matt Mackowiak, whose Potomac Strategy Group operates from offices in Washington, D.C. and Austin, Texas, includes that prospect among the President’s most significant advantages.

He told The Epoch Times on Oct. 26 the Trump’s team advantages include: “Greater intensity, likely improvement among African-Americans and Hispanics, better data, and massively more direct voter contact. Biden has a lead but it’s shrinking.”

“There are so many variables and uncertainties, nobody should be surprised by any outcome come Nov. 3, or whenever a winner is determined,” Williams said Monday.

Brian Darling, former senior counsel to Sen. Rand Paul (R-Ky.) and founder of Liberty Government Affairs, is similarly cautious, warning that, “It is no wonder that the polling indicates that Democrats are on the rise, yet we saw similar polling numbers in the swing states of Pennsylvania, Wisconsin and Michigan in 2016. There is a decent chance that the polling is wrong again, because of the unpredictable nature of this race.”

But Less Government President Seton Motley sees the most important indicator of all for the final outcome in the relative enthusiasm for Trump and Biden.

“President Trump holds 20,000-plus people rallies and drives past thousands of additional supporters lining the streets on his way back to the airport. Then there are the numerous, nation-wide Trump car caravans and boat flotillas.” Motley said.