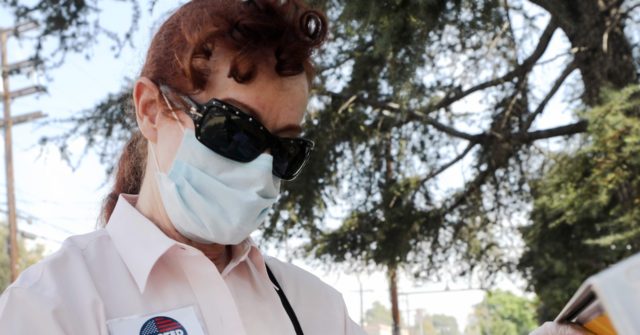 California Democrats only oppose “ballot harvesting” when “someone else is doing it,” according to California Republican Party (CRP) Chairwoman Jessica Patterson, speaking to journalists on Wednesday afternoon.

The CRP held a press conference to respond to a “cease and desist” letter from California Attorney General Xavier Becerra and Secretary of State Alex Padilla earlier this week telling the party “to stop operating unofficial ballot drop boxes.”

Republicans have pushed back, noting that they are simply using the same laws that Democrats passed for their own benefit.

“Ballot harvesting” allows third parties to collect other people’s mail-in ballots and hand them in. There is no limit on the number of ballots that they can turn in.

A new 2018 modification requires such ballots to be counted regardless of whether the harvester has identified themselves on the envelope.

Democrats took Republicans by surprise in 2018, the first election in which the practice was legal, using it in a successful effort to flip several congressional seats in the state.

Republicans have decided to respond by collecting ballots in their own boxes.

Patterson said that Padilla, a Democrat, was simply “deflecting from this mounting criticism from giving a non-budgeted $35 million get-out-the-vote contract to a ‘Team Biden’ firm.”

That contract, with a public relations firm linked to Joe Biden’s presidential campaign, has been the subject of public scrutiny; the state controller has objected to it.

CRP general counsel Tom Hiltachk said that the CRP was allowing voters to drop off ballots at boxes in its own offices, staffed by paid employees and volunteers, where the ballots were “placed in a secure box.” Other “civic-minded” organizations were also participating, including churches and retail stores.

He said that the CRP program was not “mimicking vote-by-mail drop boxes of election officials” in public places. He added that ballots collected by Republicans would be handed in within 72 hours of receipt.