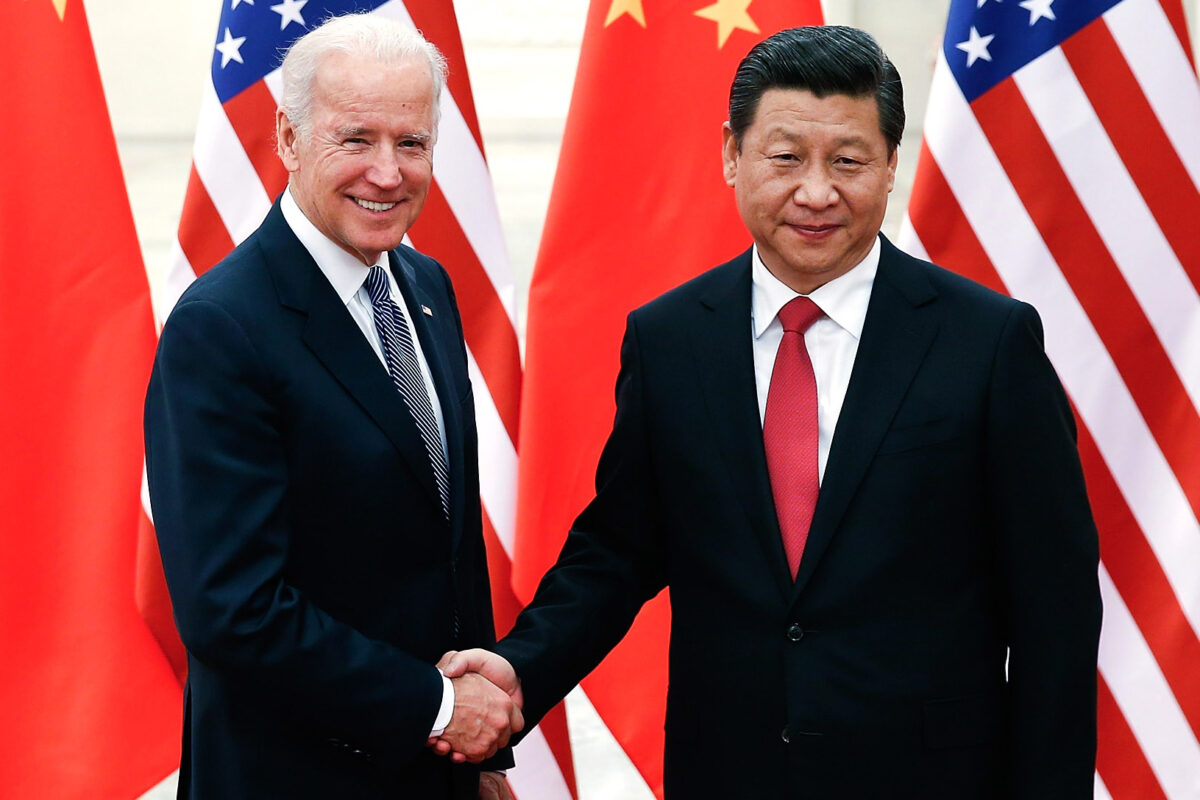 Tony Bobulinski, a whistleblower who was a former business partner of Hunter Biden, told Fox News host Tucker Carlson on Tuesday night that he believes that the Biden family, including Democratic presidential nominee Joe Biden, is compromised by China.

“What are the implications of this going forward?” Carlson asked. “If Joe Biden is elected president, which could very well happen, how does this constrain his ability to deal with China?”

“Are you asking for my personal opinion?” Bobulinski asked.

“I am,” Carlson responded. “I’m asking for your opinion, as someone who’s worked with the Chinese.”

“So, I think Joe Biden and the Biden family are compromised,” Bobulinski responded. “Obviously, I’d reference that I held a Q clearance, you’re briefed on compromise and who you’re able to talk with and deal and do business with.”

“And I just don’t see, given the history here and the facts, how Joe can’t be influenced in some manner based on the history that they have here with CEFC and stuff like that,” Bobulinski continued. “So as a citizen and an American taxpayer, I’m very, very concerned.”

TUCKER CARLSON, FOX HOST: Tell me about the money. So in the end the Chinese did send quite a bit of money.

CARLSON: Where did it go?

BOBULINSKI: So documents were all executed even after this back and forth. And Chinese CEFC Director Zang, who’s number three of the company worked directly for Chairman Ye, and the way it was presented to me as a very senior Chinese Communist Party member, was assuring me that $10 million was being sent to our bank account that was set up at JPMorgan Chase to basically fund operations and grow the business.

And in a document that you guys have, and I think it’s been provided to the world, the Chinese reference that, because of their trust in the Biden family that Chairman Ye and Director Zang are excited about moving forward in this. And in that document, they reference loaning $5 million to the BD family.

CARLSON: What are the implications of this going forward? If Joe Biden is elected president, which could very well happen, how does this constrain his ability to deal with China?

BOBULINSKI: Are you asking for my personal opinion?

CARLSON: I am. I’m asking for your opinion, as someone who’s worked with the Chinese.

BOBULINSKI: So, I think Joe Biden and the Biden family are compromised. Obviously, I’d reference that I held a Q clearance, you’re briefed on compromise and who you’re able to talk with and deal and do business with.

And I just don’t see, given the history here and the facts, how Joe can’t be influenced in some manner based on the history that they have here with CEFC and stuff like that. So as a citizen and an American taxpayer, I’m very, very concerned.

CARLSON: It seems at this point that there is so much documentation — and again, we have your documents, the one you retain, the texts and e-mails, and the legal documents.

But presumably, there are many others, because there are a lot of other people involved in this. Is it possible that this stuff just disappears and nobody covers it for the next four years if Biden is elected? I mean, it seems like there’s a lot of evidence out there.

And as you’ve said, I probably have purview into 10 percent, just picking a round number, of what was actually going on, and I would encourage the American people to go online and download Senator Johnson’s 87-page report after watching this, and read pages 65-87 and form your own conclusion.

What I’ve come forward with is a piece in that puzzle that Senator Johnson and Senator Grassley did not have. They didn’t have it because I hadn’t gone on record, and all this information and documentation was kept very, very tight.

You asked me if the information disappeared. I would expect that other parties have probably destroyed or gotten rid of information. I didn’t. I have every email, every text, every WhatsApp that was exchanged, and I’ve provided that to the authorities and here I am discussing it.

CARLSON: So you learned from the Senate report that the Chinese sent a great deal of money, but it didn’t go where it was supposed to go, correct?

BOBULINSKI: Yes, that’s correct. So take the American people back to July of 2017. I was being told by Director Zang, who’s a senior executive at CEFC, that the $10 million was going to be funded in two tranches of $5 million and $5 million.

Once again, the way they were approaching that is $5 million was a loan to the Biden family, and $5 million was their contribution to capitalize Sinohawk Holdings.

But also in July, 2017, something that happened is, over July 4th weekend while we were celebrating our Independence Day, President Xi was in Moscow meeting Vladimir Putin on an official visit.

And in that meeting, and in that multiple days, Director Zang was in Moscow participating in that. And Rosneft or media in Russia had leaked to the press that they were entertaining selling 14 percent of Rosneft, which is the state-owned, U.S. sanctioned energy company in Russia to CEFC.

When I saw that leaked, you can imagine, once again, the clearance I held, the military background, I sort of pushed away from the table like, whoa, that’s — this is stair-stepping things at a level that, do I even want to be associated with or do I even want to be near?

Shortly after that information got out, I was told that Director Zang’s visa was denied. He could no longer get back into the U.S. for meetings or to, you know, bring his wife and his kids to go to school in New York and that it was denied multiple times.

And so I was sort of walking on eggshells. You know, what’s going on? You’re saying this money is going to be funded. It hasn’t come in yet. I’m sort of near the end of my rope here.

And then in September — easily validated — it’s officially announced that CEFC is — is buying 14 percent of Rosneft, once again, the state-owned energy company.

And so, at that point, I just sort of push away from the table. The money hadn’t been funded into — into Sinohawk. And I was having daily discussions with James Gilliar. You know, what’s going on here? You know, the Biden name, Russia, China, do — you know, I don’t want to be anywhere near this. I’ve got to understand all the moving pieces.

And so we went into the fall of 2017 — very well documented — when Patrick Ho, who’s an employee or an associate of CEFC, landed in New York he was detained by the U.S. government and put in jail for corruption –apparently for leaving shoeboxes of cash to two African presidents.

And it started this downhill spiral of CEFC as a company. Remember, President Xi was traveling around the world under the One Belt One Road. That was their political approach, and CEFC was the capitalistic side of the Chinese government, doing things that they could do on the capitalist side that the government couldn’t get done.

It’s very well documented — the work that CEFC did in the Middle East, in Czechoslovakia, and Romania, Kazakhstan, in Georgia, all over the world.

When they announced that — that they were officially tendering for 14 percent of Rosneft, a deal valued at $9 billion, I sort of pushed away from the table. Like, OK, obviously that’s taking priority over this discussion and I just, sort of — you know, was watching things play out once they detained Patrick Ho.

I did reach out to Hunter Biden in October of 2017 asking him, hey, listen, they haven’t funded the $10 million, have you done something that I’m not aware of? Have you gone around us? Have you started a parallel discussion with Chairman Ye that I should be conscious of?

And in a variety of text messages that you’ve been provided, and I think the American people have been provided, he says, no, I didn’t go around you. But oh, by the way, I’m acting as the personal attorney to Chairman Ye.

Now, imagine being in my shoes, looking at my phone, reading this text message from Hunter Biden. I just spent six months all out-of-pocket myself, nobody was paying me. I was paying for my own travel, my own meals, my own cars, anything that was needed.

And Hunter Biden is now telling me that he’s meeting personally one on one with Chairman Ye in his $50 million penthouse in New York. And if he can’t meet him, he’s picking up the phone and calling him. But they only discuss things in-person.

You can imagine my anger and frustration there. Because then I’m like, oh, this has gotten slippery. You have gone around me. What’s going on here? And oh, by the way, Hunter, you’re acting as the personal attorney to Chairman Ye while they’re tendering for 14 percent of the Russian state-owned energy company, a deal valued at $9 billion, what am I missing here?

And he sort of just plays it off. And he said, I’m working on a bunch of other personal things and visas. And stuff like that, but doesn’t go into a lot of detail.

I’d love for you to ask him that. I’d love the American people to ask what those other special things were.