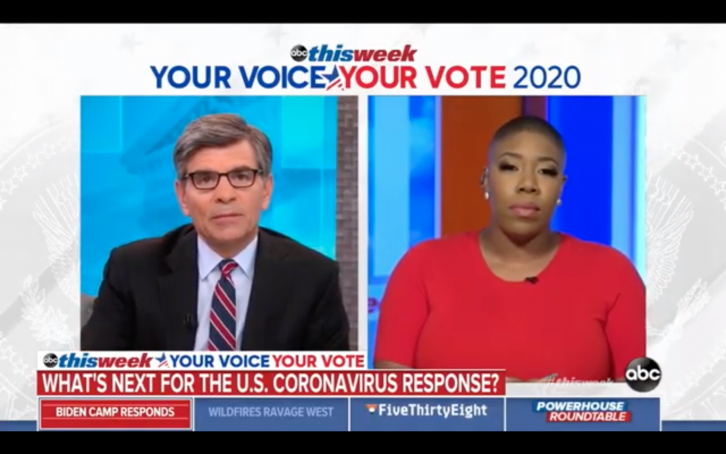 Joe Biden campaign senior adviser Symone Sanders dodged Sunday when pushed on Biden’s record on warning about the coronavirus at the beginning of 2020.

When asked for evidence that Biden called for coronavirus mitigation efforts in January or February, Sanders initially pointed to an op-ed the Democratic nominee wrote in January and his warning in October 2019 that the United States was vulnerable to a pandemic.

ABC’s George Stephanopoulos pushed back on this record, however, saying that Biden’s January op-ed did not call for travel bans, social distancing, or mask-wearing.

Biden has previously said that if President Trump “had listened to me and others and acted just one week earlier to deal with this virus, there’d be 36,000 fewer people dead.” Biden, however, continued to hold in-person campaign rallies through March along with President Trump, holding his last in-person rally on March 9. The presidential nominee issued his plan for dealing with the virus on March 12, four days before the White House issued lockdown guidance on March 16.

Last week, another Biden spokesman also attempted to misrepresent Biden’s record on supporting coronavirus mitigation efforts. Biden’s national press secretary claimed that Biden supported the White House’s China travel ban in January to help to prevent the spread of the virus, but Biden criticized Trump for issuing the ban in all of his public comments.