Democratic presidential nominee Joe Biden on Wednesday described his son, Hunter, as “the smartest guy I know,” amid growing controversy over his alleged overseas business dealings.

Speaking during an appearance at an online event hosted by Oprah Winfrey, the former Vice President recalled the time then-Sen. Barack Obama convinced him to join the 2008 Democratic presidential ticket.

“I told him I didn’t want to do it. This is public knowledge now. I thought I could help him more as a U.S. senator,” Biden said during the event that focused on voters in Pennsylvania, Michigan, Minnesota, and Ohio.

He told Winfrey that Obama persuaded him to discuss the matter with his family at home.

“So I got off the train, went home, true story. And we sat down the back and I had my deceased son Beau, who was then the Attorney General of the state of Delaware. And I had my son. Hunter, is the smartest guy I know,” he said. “My daughter who is a social worker. And my and the whole family was there. And we sat in the back porch.”

Biden’s remarks about his son Hunter came amid growing questions about his family’s business dealings and his alleged role in them after photos and emails from Hunter’s alleged laptop were published by the New York Post. A report from the Post cited an alleged email from Hunter that said he had arranged a meeting between him, his father, and a Ukrainian gas executive in Washington.

The email was confirmed to be authentic by a cybersecurity expert.

Biden’s campaign has denied the meeting ever took place, although a whistleblower who had a business partnership with the Bidens, Tony Bobulinski, has gone on record to say the former vice president was deeply involved in his son’s overseas affairs. 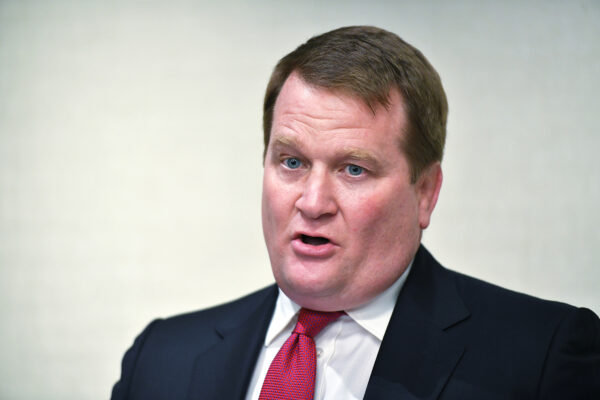 Tony Bobulinski, who claims to have been an associate of Hunter Biden, speaks to reporters at a hotel in Nashville, Tenn., on Oct. 22, 2020. (Mandel Ngan/AFP via Getty Images)

Text messages disclosed to U.S. Senate investigators by Bobulinksi also reveal that he had a close relationship with an energy tycoon with extensive ties to the Chinese Communist Party (CCP).

In text messages sent to Bobulinski on Oct. 14, 2017, Biden wrote that he and Ye Jianming, the founder of multibillion-dollar Chinese energy conglomerate CEFC China Energy, had a “solid” relationship. Biden said he was the first guest at Ye’s new apartment and that the billionaire cooked lunch for him.

“I’ve been talking to the Chairman on a regular basis. I was his first guest in his new apartment/ he cooked me lunch himself and we ate in the kitchen together,” Biden wrote, according to text message screenshots (pdf) obtained by The Epoch Times.

Biden added that Ye “has me helping him on a number of his personal issues,” including for “staff visas and some more sensitive things.”

The close relationship between the pair began as early as 2015, according to a report (pdf) by the Republicans on the Senate Homeland Security Committee. The text messages raise significant questions considering the extensive ties between the communist regime and both Ye and his company.

The Democratic presidential nominee has said he has no knowledge of his son’s business dealings and asserts that federal government officials have said on the record that he did nothing corrupt.

Ivan Pentchoukov contributed to this report.

Prison time for the Biden cartel! A family criminal enterprise!