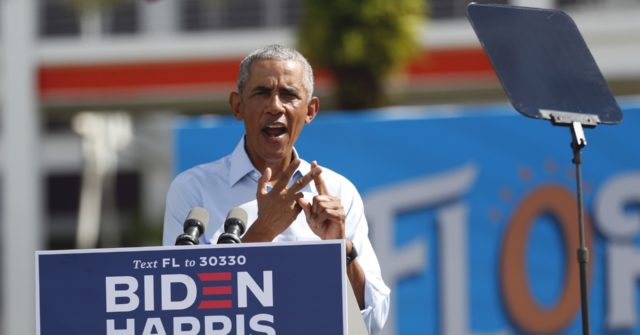 Former President Barack Obama told voters in Orlando, Florida, on Tuesday that his former deputy, Joe Biden, will “promote human rights” in Cuba — despite supporting the normalization of relations with Cuba in 2014, which yielded no such improvement.

Joe Biden wouldn’t coddle dictators. He’ll promote human rights around the world, including in Cuba. Joe will restore our battered standing around the world because he knows our true strength comes from setting an example that the world wants to follow. A nation that stands with democracy, not dictators, a nation that can inspire and mobilize others to overcome threats like climate change and terrorism and poverty and disease.

However, the deal with Cuba was often criticized for re-establishing relations with a dictatorial regime — with no resulting improvement in human rights or democracy after the deal was made.

The “Putin” claim is mostly false, as noted elsewhere.

It is true that as a Senator, and as a presidential candidate in 2007-8, Biden maintained the traditional tough policy on Cuba that had once been a bipartisan consensus.

He abandoned all of that, however, when President Obama signed a deal with the Castro regime. The deal gave Cuba full diplomatic relations and expanded trade and tourism — in exchange for nothing in return.

Biden stood right behind Obama in the Rose Garden of the White House and gave the president his full support for the one-sided deal, described by critics as a total capitulation.

Years later, the Castro regime had failed to move any closer to democracy or freedom. As a result, President Donald Trump reversed much of Obama’s policy.

Biden told a Miami television station earlier this year that he would restore much of Obama’s policy of “engagement” with the Castro regime.

Biden has also advocated for warmer relations with China, which is a communist dictatorship.