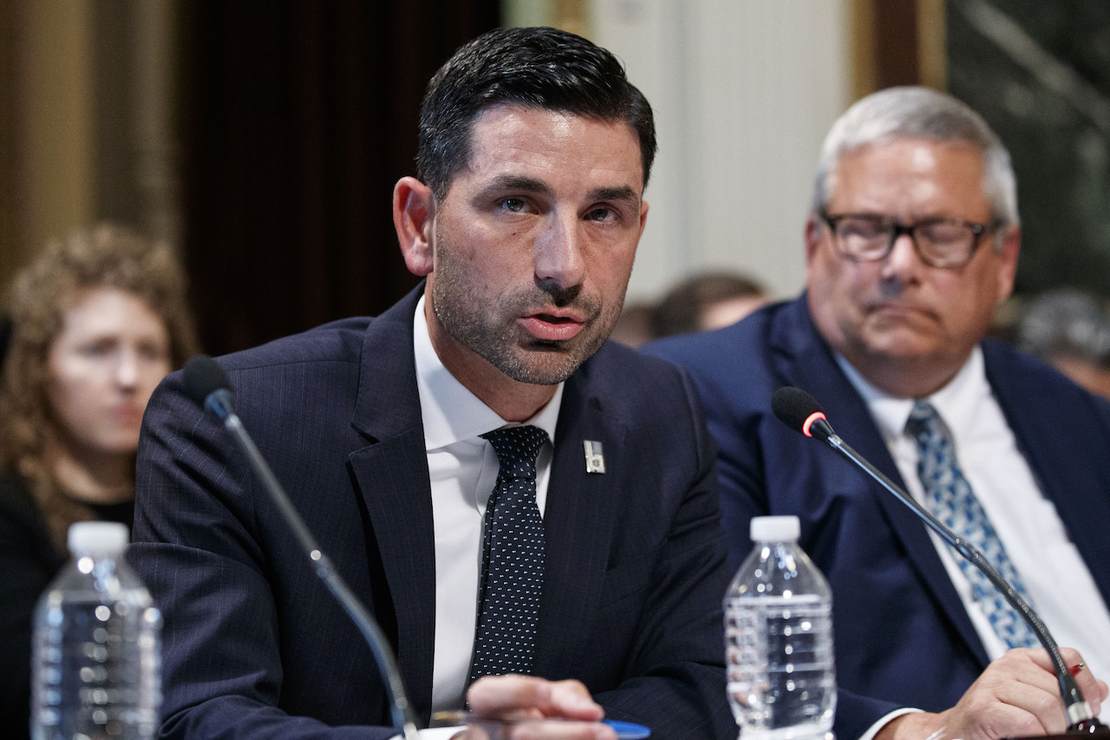 Acting DHS Secretary Chad Wolf lit up House Intelligence Committee Chairman Adam Schiff’s new whistleblower during an appearance on “Special Report with Brett Baier.” As the Democrats try desperately to make Russia the boogeyman in our upcoming election, Wolf nuked their most blatant attempt right out of the gate.

On September 9th, 2020, Schiff tweeted out a new whistleblower complaint. It received over 32,000 retweets, probably from Rachael Maddow’s most devoted viewers:

This puts our national security at risk. We will investigate:https://t.co/Z7npo3P6zv

Notable about this new complaint, Schiff had no problem disclosing the whistleblower’s name. It almost makes one wonder at the lengths he went to in order to conceal the last one. However, the complaint by former I&A Acting Under Secretary Brian Murphy fits right into Schiff’s tired narrative. Of course, Murphy is also being represented by attorney Mark Zaid, as was the original whistleblower.

In his letter accompanying the complaint, Schiff accuses DHS officials of seeking to “politicize, manipulate, and censor intelligence to benefit President Trump politically.” Of course, they are doing this by suppressing information about Russian interference in the upcoming election.

Why Schiff Is Really Mad

On July 31st, 2020, an intelligence briefing was given to the full Congress that discussed foreign powers attempting to interfere in our election. Following this briefing, members of Congress leaked classified information to the press, emphasizing Russia was working to benefit President Trump. Director of National Intelligence (DNI) Ratcliffe felt the information was being politicized against the president and ignoring the reported threats of interference by China.

In a move to limit access to classified information, DNI Ratcliffe said he would continue to brief the House and Senate Select Committees on Intelligence with written final intelligence products. The agencies will no longer be giving in-person briefings on election security and foreign interference. This change follows an astonishing number of leaks of classified information during the Trump administration. Ratcliffe has that assured all members required by law will be appropriately informed on these topics.

Speaker Pelosi and Schiff said the following in a statement regarding the change:

“This is a shocking abdication of its lawful responsibility to keep the Congress currently informed, and a betrayal of the public’s right to know how foreign powers are trying to subvert our democracy,” Pelosi and Schiff said in a statement. “The American people have both the right and the need to know that another nation, Russia, is trying to help decide who their president should be.”

“We expect the Administration and Intelligence Community to keep us fully and accurately informed, and resume the briefings,” they added. “If they are unwilling to, we will consider the full range of tools available to the House to compel compliance.”

One has to wonder if a whistleblower complaint may be a tool to compel the DNI. The Inspector General submitted Murphy’s report on September 8th and oddly reinforced the Democrats’ narrative. From Schiff’s letter:

“But this complaint also puts into stark relief how dangerous and harmful it is for American voters that the Trump Administration has decided to end briefings to Congress about foreign interference in our upcoming election. Last month, in a bid to prevent informing the American people and its elected representatives about Russian efforts to help President Trump and hurt Joe Biden, the Trump Administration announced that it would cease briefing Congress in person, and rely on written products alone. But if written products are being altered for political reasons, or worse withheld entirely, how can the American people trust that this Administration will inform voters on how foreign powers are trying to influence them, or where the threats really come from, and protect our national security— particularly when it contradicts the President’s preferred narrative or personal political interests? In short, they can’t, and that’s dangerous.

Important to note, Schiff was going to be briefed in any case as he is the Chair of the House Intelligence Committee. There is no legal requirement to inform the full Congress on intelligence matters.

However, it seems Schiff may have hitched his new Russian collusion wagon to a disgruntled employee. Employees who have been demoted, which Murphy was, often have an ax to grind. It appears Schiff’s reputation may be the whetstone.

The Acting DHS Secretary Chad Wolf appeared on Special Report with Bret Baier to talk about the agency’s activities to commemorate 9/11. Because the new complaint was in the news cycle and was against himself and the DHS leadership team, Baier asked Wolf to address specific allegations against him:

“In mid-May 2020, Mr. Wolf instructed Mr. Murphy to cease providing intelligence assessments on the threat of Russian interference in the United States, and instead start reporting on interference activities by China and Iran. Mr. Wolf stated that these instructions originated from the White House National Security Advisor Robert O’Brien.”

The allegations went on to state that Wolfe instructed Murphy to hold a report because it made the president look bad. Does this all sound a little too perfect for you? Maybe a bit strange since the July 31st briefing to the full Congress contained information on Russia? It sounded more than a little off to Secretary Wolf.

He called the account a complete fabrication. He said there had been over forty briefings to Congress, including three in August regarding Russian interference in our elections. He added he has talked about the topics in media appearances and congressional testimony. Wolf said the issue was even covered during his recent State of the Homeland Security address.

Baier noted that the Chairman of the House Homeland Security Committee Bennie Thompson (D-Miss.) had issued a subpoena for Wolf to testify alleging the acting secretary was avoiding testimony. Wolf went on to explain that he agreed to testify on two separate occasions in August.

Since then, Wolf has been nominated for the permanent position, and there is a long-standing practice that during the nomination process, an individual does not testify on other matters. The number two at DHS has been offered to Congress to testify in Wolf’s place. If this is not acceptable, Wolf will gladly testify once his confirmation process is finished regardless of the outcome.

Then came the torching. According to Wolf, in early August, he received a credible and serious complaint that the Intelligence & Assessment Office inside DHS was collecting information on American journalists. Murphy was in charge of that office, and he was demoted as a result. Wolf added that there is an ongoing Inspector General investigation into those allegations, and Murphy was unhappy about it. Wolf said now we see the results of that dissatisfaction.

The allegations certainly seem to fit Schiff’s narrative on RUSSIA, RUSSIA, RUSSIA a little too perfectly. So does the timeline. If Wolf approached Murphy in May and gave him the alleged instructions in July, why would this upstanding pillar of moral righteousness wait until September? He wouldn’t.

And you would think all of our journalistic firefighters would be up in arms over Wolf’s revelation. Of course, they aren’t. It was probably just that execrable, Tucker Carlson. Or maybe John Solomon and Dan Bongino. There is a class of journalists the corporate media reviles, and as long as it is those people, no big deal.

However, perhaps we can hope the Russia narrative will die if this investigation blows up in Adam Schiff’s face. That particular meltdown is long overdue.

You can watch Wolfe’s full remarks below:

ditor’s Note: Want to support PJ Media so we can continue telling the truth about the 2020 election? Join PJ Media VIP TODAY and use the promo code LAWANDORDER to get 25% off your VIP membership.